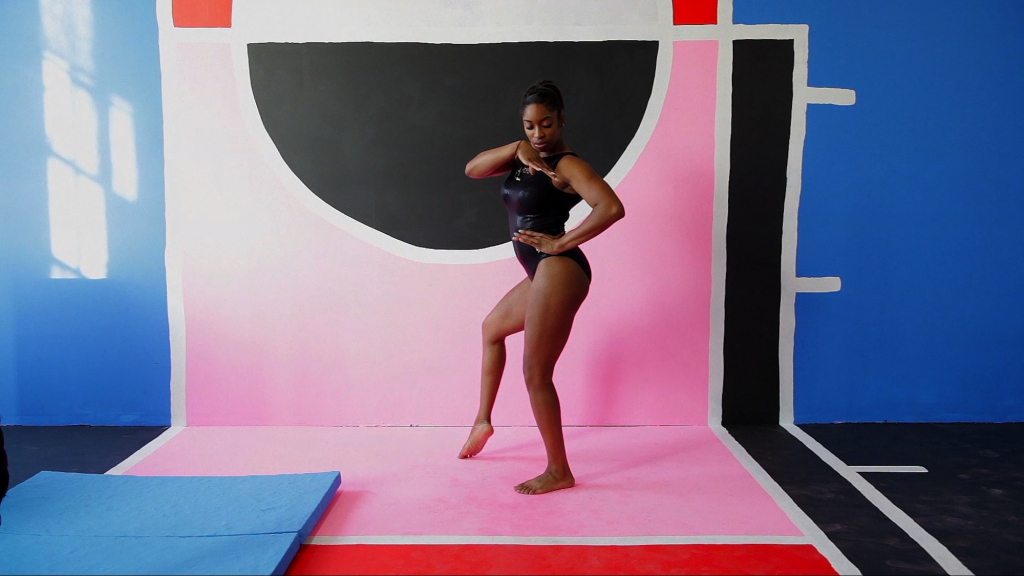 Sports are not a refuge from the “real world.” Sports have been and always are political. Who gets to play? Who is penalized for what? Which stadiums are built, where, and with whose money? Eminent domain, organized labor, drug and gender testing, commercial sponsorships, tax breaks, bribery and abuse scandals are just some of the ways power is flexed daily within what has been called a secular religion and a proxy war. The artists in this exhibition draw upon the hidden and political histories of sports to open up analyses of the social world.

The Olympic gold winning routines of Simone Biles, Nadia Comăneci, and Shannon Miller are abstractly relayed in the little-known shorthand used by gymnastics judges in Karen Kraven’s risograph prints. Conversely, the point-scoring stunts are stripped from the routines performed in Macon Reed’s video, leaving a series of exaggerated flourishes that accent the hyper-feminized sport of women’s gymnastics.

Athletes and sports advocates who have refused to be constrained by societal expectations of gender are celebrated by Cara Erskine. Whether admonished by the public for “unladylike” behavior, snubbed by sponsors, or forced to take humiliating sex verification tests (resulting, even, in the erasure of their world records), these gender outlaws and heroes have inspired, authored, and embodied Title IX, which ensures equal access to sports for millions of girls and women in the United States.

The elite sport of golf is brought to the commoners minus green fees via a video of Gao Mingyan roguishly using communal space. Similarly alluding to the disappearance of public land and the role of luxury real estate development, Zhang Qing stages an absurd soccer match in his cramped apartment, complete with professional players and a referee knocking over dishes and tripping on bedsheets.

Zhang’s multi-channel work of a domestic space recorded with surveillance equipment also brings up concerns about privacy. In Hazel Meyer and Cait McKinney’s collaborative drawings and texts, the unspoken intimacies and desires among women basketball players are brought to the surface.

The title of this exhibition Power Forward, refers to a position in basketball that emphasizes a combination of strength and skill. Traditionally, it has been the domain of lumbering, back-to-the-basket scorers and stout rebounders. But over the past decade it’s evolved into a role that requires increased quickness, defensive versatility and outside shooting skills. In like manner, many of the artists in Power Forward are versatile in sports- as current or former athletes, as serious fans and as makers inspired by athletics. The title also references the Black Panthers slogan, “All Power To The People” and the desire for shifts in the balance of power. 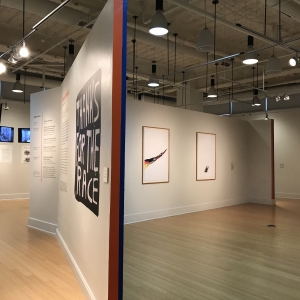 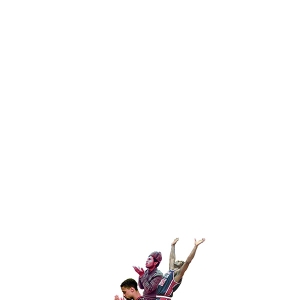 Power Forward is curated by Astria Suparak (2018 VisArts Mentoring Curator) with the assistance of Anthony Stepter (2018 VisArts Emerging Curator). It is part of A Non-Zero-Sum Game, a series of exhibitions and events launching, and part of, INCITE: Journal of Experimental Media’s newest issue, Sports.

Generous funding for Power Forward has been provided by