Sue Johnson: Hall of Portraits from the History of Machines 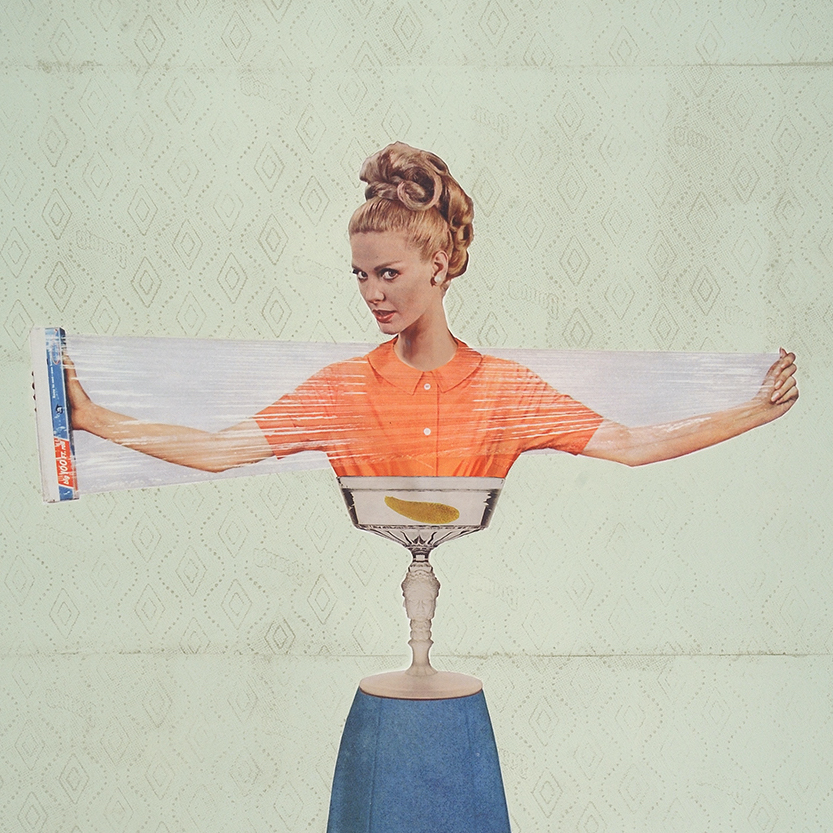 Sue Johnson: Hall of Portraits from the History of Machines

Hall of Portraits from The History of Machines proposes an alternate pictorial history in which two objects of desire become one — the household convenience object and the emergent female form. The project looks back to the mid-20th century and identifies this era as a cornerstone in the construction of the modern woman, who, begins at this time to be idealized as sharing attributes with laboring-saving appliances and gadgets. Domestic convenience objects merge with the body, or vice-versa, from vacuum cleaners to coffee pots and telephones with extra-long cords. Based on authentic sources from mid-century advertising and the artist’s photography of objects in her collection, the resulting women seem familiar yet simultaneously we know that they are actually a highly fictional, patriarchal fantasy. To emphasize this artificiality, each is surrounded by a color-field created by dragging and scraping household devices through the paint. Accompanying the portraits are facsimile prints that document the exact found object sources used to create the ‘mechanical brides’ for the project. Commercially printed by a billboard sign company, each panel assembles the original sources used by the artist, represented at their original scale. For example, to create the Bride, materials include an advertisement for a Regina floor scrubber and polishing machine, an image of a wedding gown from a 1950s woman’s magazine, and a hairstyle design performed on the head of a red-headed model. All unique and hand-painted, works have been created on three different scales; first a large-scale work, then medium and miniature versions were made. At their original large scale, each portrait measures 109.25 inches tall, which is the exact height of Marcel Duchamp’s The Bride Stripped Bare By Her Bachelors, Even (The Large Glass). In making this reference, Johnson seeks to invite a deeper look at the taxonomy of the representation of women.

Sue Johnson (b. San Francisco, CA) earned an MFA in Painting from Columbia University and a BFA in Painting from Syracuse University. Revisionist in method, her installations and artworks create plausible fictions that run parallel and counter to canonical histories, focusing on topics including the early modern museum, picturing of Nature and women, and the domestic universe and consumer culture. She has developed research-based exhibition projects for the Pitt-Rivers Museum, The Rosenbach Museum and Library, Salisbury and South Wiltshire Museum, and the American Philosophical Society Museum. Solo exhibitions have been organized by the Tweed Museum of Art, John Michael Kohler Art Center, University of Richmond Museums, The University of Memphis, Eleanor D. Wilson Museum, and McLean Project for the Arts among others. Award include a Pollock-Krasner Foundation Fellowship, a NEA/Mid-Atlantic Foundation Fellowship in Painting, New Jersey State Council on the Arts Fellowship, Virginia Museum of Fine Arts Visual Arts Fellowship, and four Individual Artist Awards from the Maryland State Arts Council. She has been awarded over 25 residency fellowships in Austria, Germany, Belgium, Ireland, Italy, France, and the U.S. Exhibition reviews have appeared in The New York Times, The Washington Post, Brooklyn Rail, New Art Examiner, and Art Papers.