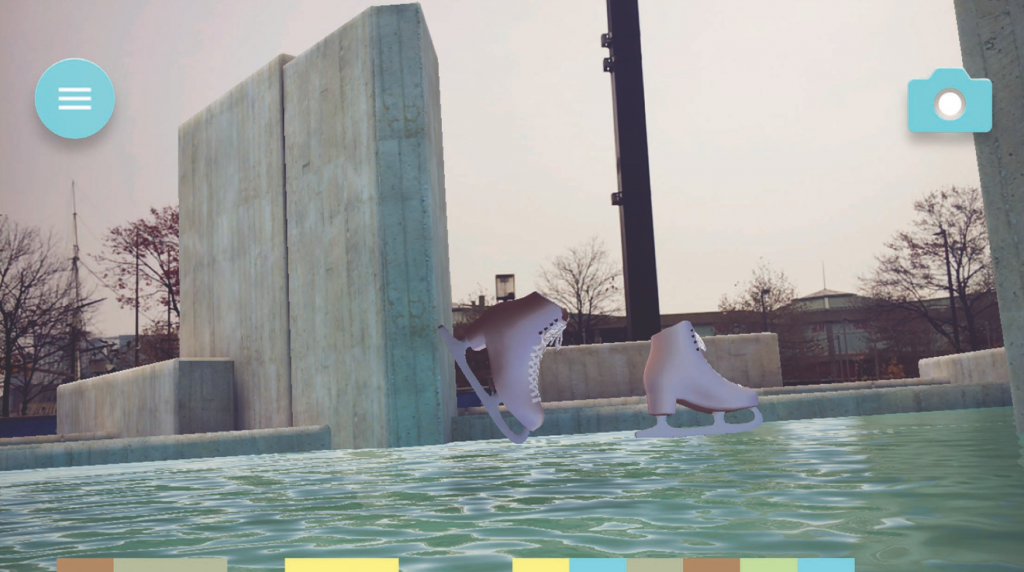 Lisa Moren’s media-based art considers monuments, history and public spaces in Eastern Europe by collecting ordinary memories from former communist citizens. In 2015 she collaborated with two Slovenian artists on a Baltimore public art project that celebrated the ordinary citizens that make public space vibrant. The final outcome of their project is NONUMENT 01::McKeldin Fountain, an exhibition centered on Baltimore’s rare public fountain that was demolished in 2017. In opposition to bronze and stone, nonument [or “no monument”] celebrates the transitory nature of everyday experiences using new and emerging media forms. McKeldin Fountain is located in a Free Speech zone in Baltimore’s Inner Harbor, and is popular among local workers, tourists and residents. The story of McKeldin Fountain is an example of the escalating privatization of public spaces world-wide, a trend that continues to diminish access to full participation and free speech for ordinary people in everyday urban life. The project documents memories of activists living in the Square during Occupy Baltimore; Women in Black and Black Lives Matter; along with performers, artists, rappers, teachers, a lawyer, a former Baltimore mayor, and personal poetic and political stories imbued with the frail democracy of this public square.

Lisa Moren is a multi-disciplinary artist who works with emerging media, public space and works-on-paper. For more than 10 years she has worked with communities to document under-represented memories from Berlin and cities in Central and Eastern Europe that were archived as interactive installations. Lisa has exhibited her work widely at the Chelsea Art Museum, Cranbrook Art Museum and many international venues including Ars Electronica, Akademie der Kunste and the Artists Research Network, part of LaTrobe University in Melbourne, Australia. She has received numerous awards including the National Endowment for the Arts, a multi-year recipient of the Maryland State Arts Council, CEC Artslink International, a Saul Zaentz Innovation Fellow at Johns Hopkins University and many others. Her writing has appeared in Performance Research, Visible Language, Inter Arts Actuel, New Media Caucus for “Algorithmic Pollution: Artists working with Landscape, Surveillance and Code” and “CYBER INSECURITY” and her own books on Intermedia and Issues in Contemporary Theory for “Command Z: Artists Working with Phenomena and Technology.” Lisa Moren is a Professor of Visual Art at the University of Maryland, Baltimore County and the Graduate Program Director of the M.F.A. program in Intermedia + Digital Art. She lives in Baltimore with her husband and two children. www.lisamoren.com

Jaimes Mayhew is an interdisciplinary artist whose work is collaborative, and based in his interests of land use, speculation and installed environments. Mayhew has received awards and grants from The Fulbright Commission, The Maryland State Arts Council, the Baltimore Museum of Art and Provisions Library. Mayhew’s work has been shown at The Baltimore Museum of Art (Maryland), Arlington Arts Center (Virginia), Eyebeam (New York City), Mass MoCa (Massachusetts), Conflux Festival (Brooklyn), The Chapel of St. Cecilia (Brooklyn, New York), The Red Dawns Festival (Slovenia), 808 Gallery (Boston), The Transmodern Festival (Baltimore, Maryland), Goucher College (Baltimore, Maryland), Hoffmannsgallerí (Reykjavík, Iceland) among others. Mayhew has given talks about his work at Rhode Island School of Design, Emerson College, The Center for Innovation, Research and Creativity in the Arts at UMBC, Johns Hopkins University, Cranbrook Academy of Art, George Washington University and the Corcoran School of Art. His work has been published in Art Papers, Undercurrents Journal, Baltimore City Paper, Washington City Paper and the Boston Globe. For more information see: www.enginesofthefuture.com.

Neja Tomšič is a visual artist and poet from Ljubljana, Slovenia. Since graduating in painting at the Academy of Fine Arts in Ljubljana she has been part of several group and solo exhibitions, performing and publishing poetry and prose among others. She researches documentary cinema and related practices in the contemporary art context, which is also the topic of her PhD research at the Department of Philosophy, and Theory of Visual Culture at the University of Primorska.

She is a co-founder of MoTA – Museum of Transitory Art, a research and production platform devoted to transitory art and its project space in Ljubljana, formerly the MoTA Point, now the MoTA LAB. Since 2008, she has produced and curated solo exhibitions and projects (Marina Rosenfeld, Jorge Rodriguez Gerada, Lexa Walsh, Baraga etc), group exhibitions (The Ghostwriter Project, Arte/Facts, Cartographies of Transitions, etc), Sonica and Sonica Classics concert series (with Charlemagne Palestine, Hildur Gudnadottir, Jozef van Wissem, Valerio Tricoli, Jason Lescalleet, etc), the Sonica Festival (from 2009 in different venues and public spaces in Ljubljana), symposia (Cartographies of Transition in Nicosia, Cyprus; Third Culture in Ljubljana). She edited the RoboVox, Your Voice reader monuments and robotos, published at rx:tx; Outerviews. Conversations with artists and TRIBE – Excercises in Transitory Art, published by MoTA. She was a Goethe Institut fellow and recipient of ArtsLink Fellowship, followed by the ArtsLink individual projects grant for the project NONUMENT01: The McKeldin Fountain. In 2014-15 she performed in Škrip Inc, a theatre play directed by Jelena Rusjan and was part of the Screech Orchestra group (2011-2013) which toured widely, in New York City among other. She created live visuals for performances of singer Katja Šulc, and performed at festivals Druga Godba, Lent, Dreams Festival and at the Recollets Center in Paris, among others. Her recent project is Tea for Ten: The Opium Clippers, a visual essay joining research and hand painted ceramic tea sets, depicting maritime history related to the opium trade in the 2nd half of 18th and 19th century. For more information see ne-ja.com

Martin Bricelj Baraga is an artist based in Ljubljana, Slovenia.  His interactive works, audiovisual performances and collaborative work researches the relation between man and machine, social aspects of contemporary popular culture, future monumentalism and political dimensions of mediated realities of today. His large-scale, architectural installations question symbols and myths as a series of time and space-based experiments. Martin has exhibited worldwide including ICA in London, Sonar in Barcelona, Columbia University in New York, FACT Liverpool, Kinetica ArtFair, Centro cultural Recoleta in Buenos Aires, Kunsthaus Graz, Kaapelithas in Helsinki, Museums Quartier in Vienna, GLOW in Eindhoven and many others. His work has been reviewed and published by Wired, boingboing.net, Pecha Kucha, the New York Art magazine, Harper Collins, El Pais, Actar, Mladina and others. DarkStar won the GLOWNEXT Festival commission and was exhibited in Eindhoven with over 400,000 visitors, and his recent installation Cyanometer at WRO Media Art Biennale 2017 won the critics first prize. His project Everlandia at the ICA London was listed among the top five events nation-wide in UK Times. Other media highlights include a special feature in TimeOut London, and interviews on BBC Radio1, wemakemoney-notart; and in the Slovenian Mladina and Sobotna Priloga, among others. Martin Bricelj Baraga is the director of MoTA – Museum of Transitory Art and the founder of SONICA Festival in Ljubljana, Slovenia. For more information see www.baraga.net