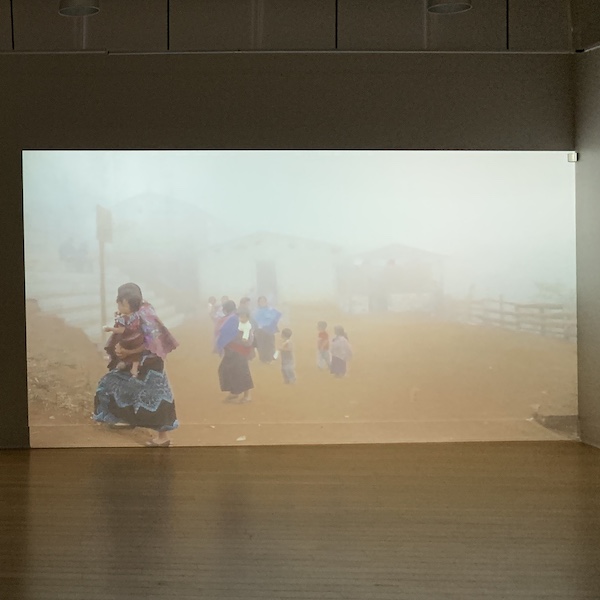 Read descriptions of the video works

From 2009 to 2014, EDELO, Where The United Nations Used to Be, was an artist run project in Chiapas, Mexico (currently nomadic) that created sculptural performances and community events through relational aesthetics, social practice, and social sculpture. Founded by Mia Eva Rollow and Caleb Duarte, EDELO centered its practice as an intercultural artist residency of diverse practices and an ever-changing experimental art laboratory and safe house. The work at its core focused on the lessons and use of art by the EZLN, the Zapatista autonomous indigenous movement in Chiapas, Mexico that has used art as a main tool to demand immediate and drastic social and economic change as a response to 500 years of invisibility, oppression, and neglect. The works consisted of artist residencies in Zapatista territory as well as at our art center and gallery. The emerging aesthetic was one of urgency in the face of the continuing clash between colonial and Mayan Mexican indigenous worldviews. The work focused on intersectionality as a nucleus for engagement and centered around the themes of movement; tying together notions of ableism, human displacement and generational traumas, land and human rights, child labor and femicide, autonomy and self- determination. This was a women-led indigenous resistance that imagined a sustainable future on a local micro scale, imagining a world where ‘the flower of the word never dies.’

The Sailing Stones Act features a select body of work that was produced from EDELOMigrante in Mexico, India, and Palestine in site-specific lands of spiritual, social, and cultural resistance. It strives to facilitate the expressions of communities through a distributed authorship. To that end, the work demands transdisciplinary creative forms in sculpture, performance, community-based public intervention, and psychomagic. Many of the works organize community participation in ceremonial processions that demand a slight moment of hyper visibility of an otherwise underground community and an occult dimension. The work becomes alive as the participants enter into a shared dreamscape created through workshops, interviews, and intimate conversations. We collectively develop a visual language that is bold, unapologetic, site specific and surreal in the Latin American tradition that injects a magical realism into moments of uncertainty. The documentation only acts as a residue that hopes to evoke some break from rationality for the viewers, some opening into the subconscious mystery so that we may forget what we were taught and begin to see.