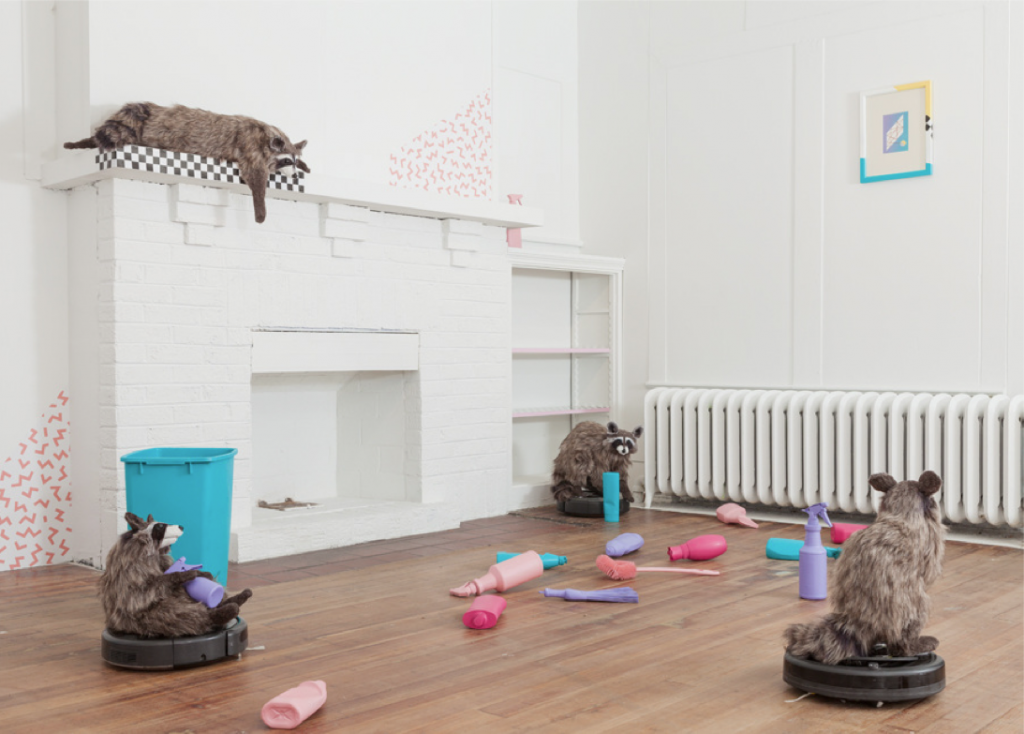 Maria Lux’s installation, Dominus, considers resistance—in both animal and machine—against the human force to domesticate and dominate. Raccoons (notoriously impossible to domesticate, but known for their fondness for human trash and their misunderstood propensity for washing things) and Roombas (self-driven robotic vacuum cleaners that often make bigger messes than they clean up) join forces to create chaos in the gallery space, emphasizing their perversely pleasurable defiance of human will.

About the artist: Maria Lux is a research-driven artist who makes installation-based works centering on the way animals are used to generate human knowledge and understanding. She works across disciplines, building projects around existing research and stories from fields such as evolutionary biology, medicine, agriculture, history, literature, film, and anthropology. While Lux’s background is in traditional drawing and painting, her current work includes a variety of materials and processes, ranging from dioramas and museum-style display cases, collage and large-scale carving, to casting, stop-motion animation or sewing. She places herself within a context of both art-worlds and scholarly discussions, and sees her work as part of a larger dialogue (connecting to the field of animal studies) that investigates the unique qualities of both animals and art-making.

Lux earned her B.F.A. from Iowa State University in graphic design and studio art in 2006, and her M.F.A. in painting and sculpture from the University of Illinois at Urbana-Champaign in 2012. She has shown work throughout the United States including solo exhibitions in Portland, Oregon; Raleigh, North Carolina; and Rockville, Maryland. She has been an artist in residence at several residencies including the Prairie Center of the Arts in Peoria, Illinois, the Center for New Art at William Paterson University in Wayne, New Jersey, and the Enos Park Residency in Springfield, Illinois. She is an Assistant Professor of Art at Whitman College in Walla Walla, Washington.

Raccoon names: Melanie (named after the internet-famous pet raccoon trained to use a broom), Rebecca, (the pet raccoon of Calvin and Grace Coolidge during his presidency), Pepsi, and Twizzler (boy-scout camp pets of the owner of one of the Roombas).

Roomba names (names given their owners): Roomby, Roomba, Brave Little Baby, and Rosie (a back-up robot in case another is broken, named after the robotic maid on the Jetsons cartoon show)