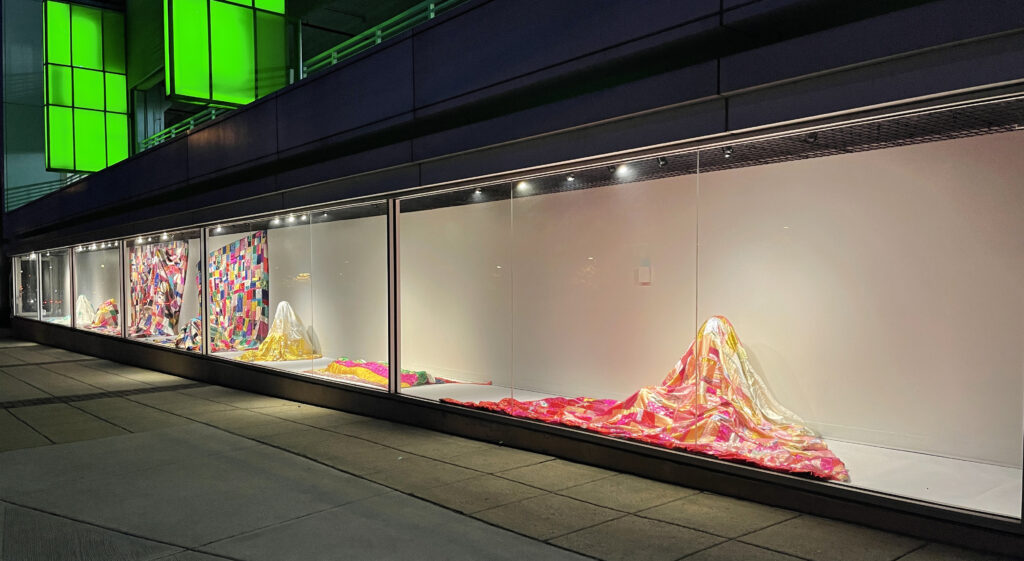 I sew interpretative bojagi—Korean object-wrapping cloths historically created since the early Joseon Dynasty (1392–1910)—and wrap hallow human-scale figures with them to comment on the objectification of Asiatic female bodies. I create color gradients that turn to white to comment on erasure and whitewashing. Korean textile is not only created through sewing and manipulating fabric to suggest a trapped, exoticized female body, but also invented by overloading the textiles with patterns that are perceived as Korean.

The human-scale figures are wrapped like an object with overtly colorful textiles to express the embodied experience, and both the gravity and absurdity of objectification. The one-dimensional way she is seen is imposed upon her. However, the fabrics are not only covering, blocking, and suffocating, but also protecting, hiding, and mystifying the body. The work is inspired by my experience of being seen as “the other.” I aim to capture the tension that arises from the divide between different social groups and the mindset of “us versus them.”

The textiles I create symbolize constructed notions of what it means to be Korean. My work is not simply a representation of minority identities, but rather a commentary on the dehumanizing process of being identified, reduced, and categorized. I shift the focus from the search for authentic origins and clear categories to the complexities of constructing identities within the context of globalism, cultural hybridity, intersectionality, and the collective struggle for social justice.

Julia Kwon is an interdisciplinary artist whose work is in the permanent collection of Smithsonian American Art Museum and Renwick Gallery (Washington, DC), Cooper Hewitt, Smithsonian Design Museum (New York, NY), Museum of International Folk Art (Santa Fe, NM), and The New York Public Library (New York, NY). She has exhibited nationally at venues including the Virginia Museum of Contemporary Art, The Peale Center at Carroll Museums, Hartnett Gallery of the University of Rochester, and Torpedo Factory Art Center. Her work has been featured and reviewed internationally including the Smithsonian Magazine, The Washington Post, Korea.net, BmoreArt, PBS’s WETA Arts, and SBS International News. She was awarded artist residencies at Banff Centre for Arts and Creativity, Vermont Studio Center, NARS Foundation, Textile Arts Center, Chautauqua School of Art, among others. ​She holds an MFA from the School of the Museum of Fine Arts at Tufts University and a BA in Studio Art from Georgetown University.