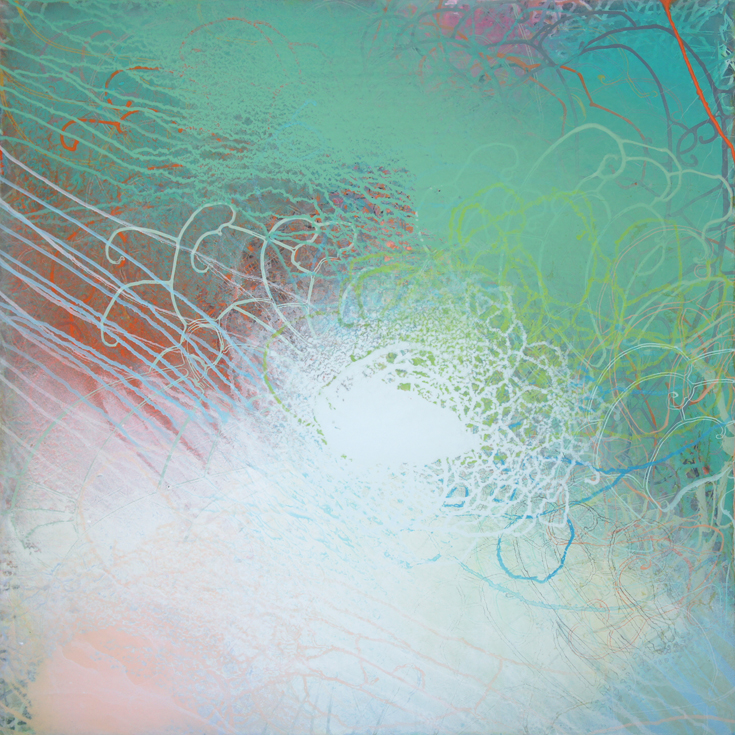 Greg Minah’s painting process might best be described as a collaborative performance between his creative force as an artist and the natural forces acting on the material. He make paintings by pouring thinned acrylic paint onto the canvas and then tilting, turning, and spinning the stretcher to orchestrate the performance of the medium. Often, a layer is partially removed with pressurized water before it has a chance to cure completely, leaving only the outline of the poured paint and revealing the multi-layered construction of the work. Through careful mixing and testing of the paint, I control the colors, the basic shapes and the overall composition of the painting, but every step in this process yields something unexpected. He remains open to chance. Minah is inspired by the working process itself, the constant give and take of authorial intent, and the unpredictable effects of gravity on liquid paint.

About the artist: Born in 1978, Greg Minah grew up in Columbia, Maryland and graduated from the University of Maryland at College Park in 2001 with degrees in English Literature and Studio Art. In 2009, Minah was honored as a finalist in both the Bethesda Painting Awards and the Trawick Prize. He received the top Individual Artist Award Grant in 2010 from the Maryland State Arts Council and had ten paintings reproduced and permanently installed on an outdoor public wall in Arlington, Virginia, in 2011. In 2012, Minah was selected to exhibit at the US Embassy in Guatemala as part of the Art in Embassies Program and another public installation, Tunnel Vision, was installed in the Washington, DC Metro. In 2015, a survey show of Minah’s work was accompanied by a catalog featuring an original essay by the director of the Baltimore Museum of Art, Doreen Bolger. Minah’s paintings have been included in group and solo exhibitions throughout the United States and can be found in public and private collections internationally. Minah currently lives and works in Baltimore, MD.