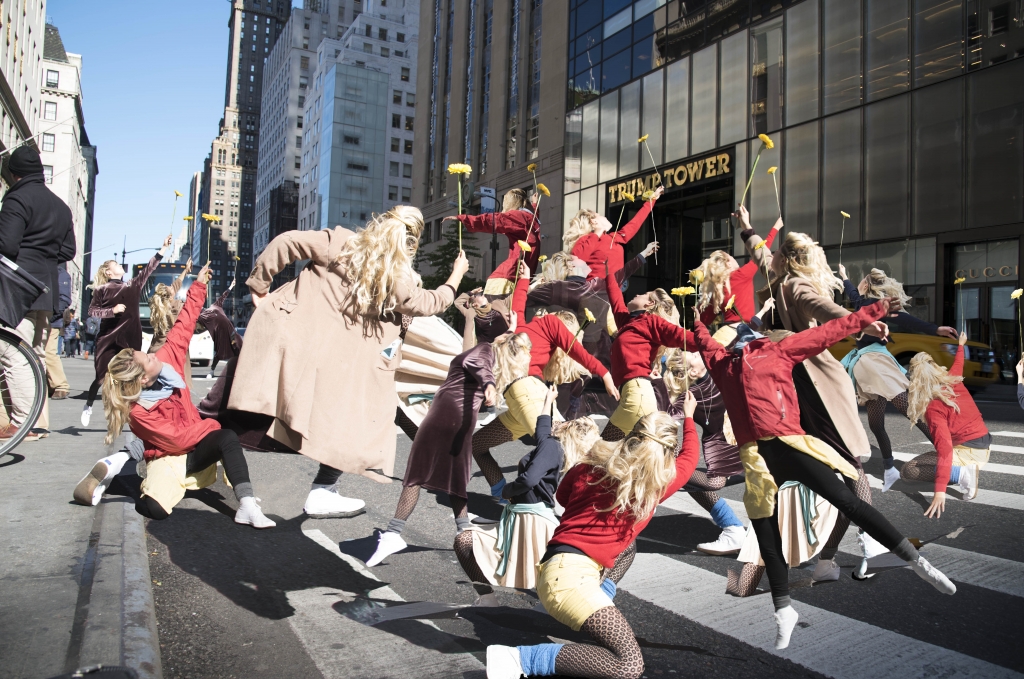 Through ethical imagining, ornamental activism, speculative poetics, and radical gift giving, Estefani Mercedes stages public interventions that attempt to create small reversions within larger hegemonic structures. In her solo exhibition at VisArts, Mercedes re-presents through video and photography her recent performance 1,000 Yellow Dahlias. She asked 1,000 different Latino immigrants in New York City to write “thank you notes” to the then presidential hopeful Mr. Trump who had made numerous public xenophobic remarks towards Hispanics. She then delivered 1,000 yellow dahlias with the corresponding notes to Trump Tower in Midtown during the September Tax Reform speech. The dahlia is the national flower of Mexico and to turn yellow it must be deprived of oxygen. The performance went viral and was picked up by both the right wing media and Latin American art newspapers.

She says, “I do not believe that art creates change — just dialogue.”

“Art activism will never trump more radical forms of protest. But perhaps through the acceptance of one’s own failure and the denial of improvement, alternative modes of affect can be developed. We need to de-functionalize art forms and artistic practices. Activist art’s productive uselessness is its greatest asset.”

“This [1,000 Yellow Dahlias] was a failure of a protest, but an extremely successful performance. Mercedes is on six pages of google news and the work has sparked serious debate…While I think the form demonstrates a remarkable shift in contemporary performance to now deny [the artist] our own support as spectators would be a travesty. This performance — in many ways like Mr. Trump’s existence — has exposed some truly ugly bones of the American psyche.”-ArteFUSE, “The Political Performance and the Art of Failure” [September 2015]

Stephanie Mercedes is a Argentinian/American Performance Artist who studied Political Science and Fine Art at Smith College. Mercedes was a 2014 recipient of the Norfolk Fellowship from Yale School of Art and a 2016 fellow of the Art + Law Program in New York. Mercedes has participated in the following artist residencies: Lugar de Dudas, Genesee Residency of Photography, Kimmel Neilson Artist Residency, Largo das Artes, LPEP and SOMA Summer. Mercedes has exhibited throughout Argentina, the US, Brasil, Mexico and Switzerland.