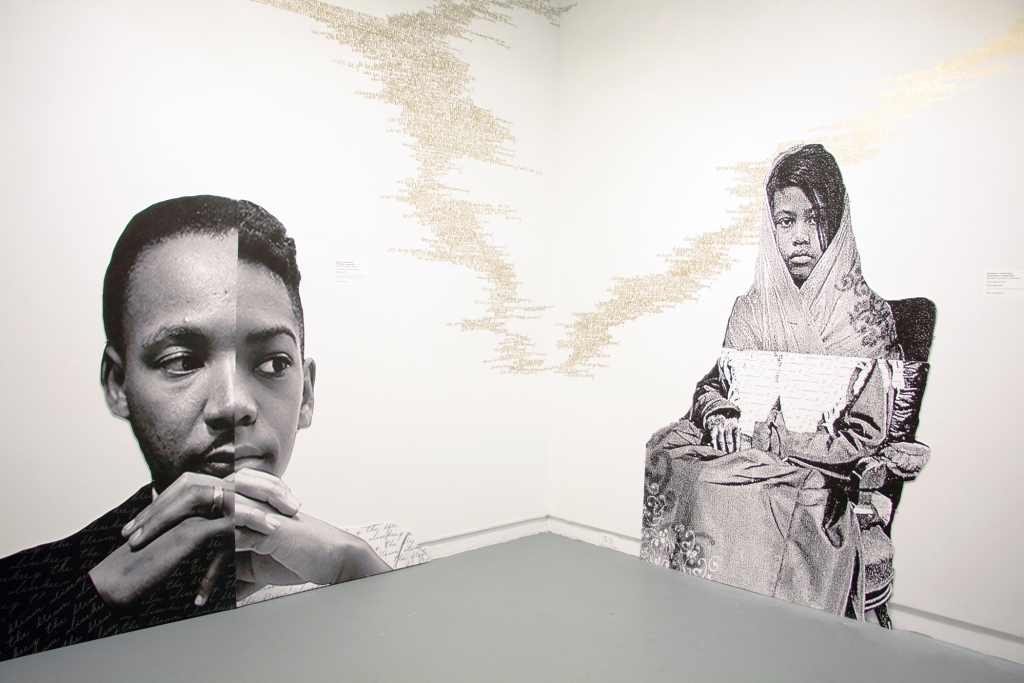 About the curator: Ashley DeHoyos is an emerging curator from Houston, Texas, who currently lives and works in Baltimore, Maryland. She received her Bachelors of Fine Arts in Photography from Sam Houston State University and her Masters in Fine Arts in Curatorial Practice from Maryland Institute College of Art. She has worked as an intern at the Philadelphia Museum of Art in partnership with ArtTable, and was an Urban Arts Leadership Fellow under the Greater Baltimore Cultural Alliance at Baltimore Office of Promotion and the Arts. Most recently, Ashley has been working as a Community Art and Service Program Assistant at Maryland Institute College of Art and college mentor with Bloomberg Art Internship Baltimore.

October 1 /// 12 – 4 PM
GuerillArt (part of ArtWatch DC), Kaplan Gallery
GuerillArt invites participants to make an interactive banner that will list their most pressing current issues.  This scroll will grow over time and become a historical artifact documenting the public’s concerns and a powerful visual protest tool.

October 11 /// 6 – 8 PM
Open Mic Night: Spoken Word/Performances, Kaplan Gallery
*Special Performance by Judy Swearingen/*Graphic content, mature audience only.
In a tribute to the piece Silence = Death by David Wojnarowicz, Judy Swearingen, will sew their mouth shut in an hour performance at the hands of professional piercer in front of a live audience.

Openly resisting dominant culture is a privilege many cannot afford. As a performance artist, I use my middle-class, white, American privilege to confront my fears based on consequences of speaking out. As a young Queer individual, I benefit from the many before me who suffered the consequences of a less tolerant society, allowing me to be more vocal than past generations. This performance is an homage to the artist, David W. who with his visual and written artwork, resisted and staked claim to his rights, dignity and free speech of Queer people and art.