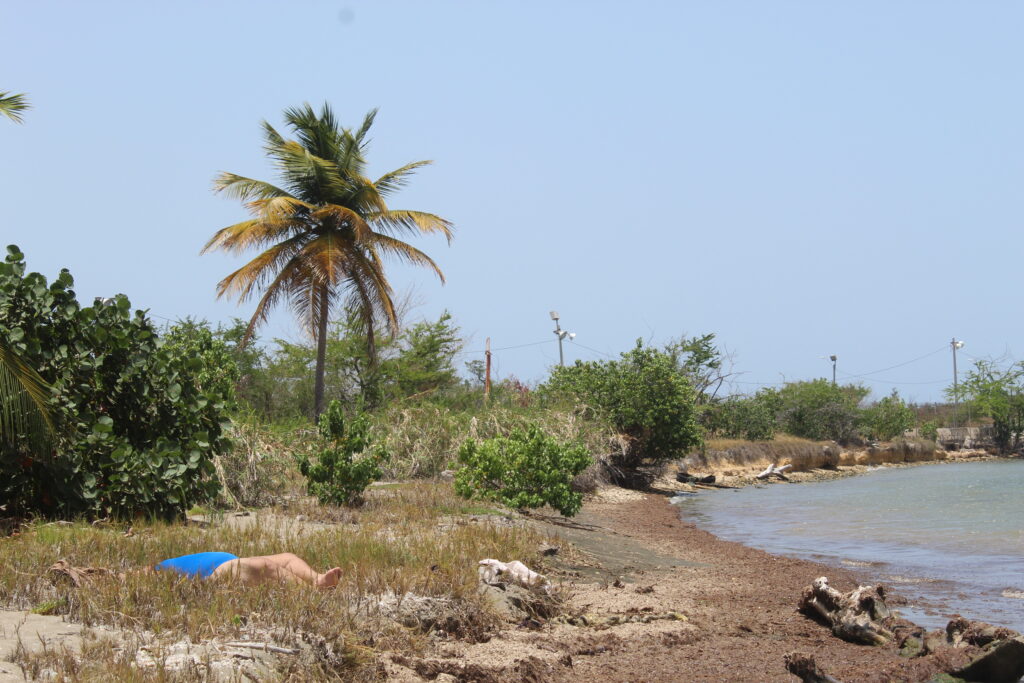 Caribbean-yet-to-come is a curatorial research project that takes an embodied look at Caribbean islanders’ contemporary performance practices being enacted on, across, and through the submerging archipelagic stage of the Antilles’ terraqueous zones*. The exhibition centers on Caribbean islanders’ terraqueous proximities, intimacies, and entanglements with coastal erosion as a climate-change-inflected oceanic force that exceeds Caribbean tidalectic geo-poetics. By re-signifying coastal erosion as a planetary geo-poetic that goes beyond the coloniality of disaster, Caribbean-yet-to-come traces a series of Antillean performances that seek to ruinate Caribbean island’s colonial-built environments, speculate with in-land migration of colonized tropical island’ coastlines, oceanic submergence and fugitivity, and fabulate on the telluric movements necessary to transform the Antilles’s colonial territories otherwise after submergence.

* [The Antilles’ terraqueous zone is the geo-material space trans-historically articulated in-between the Black Atlantic’s oceanic abyss and the Caribbean’s post-plantation archipelagic lands that is animated by the constant movement of oceanic, telluric, meteoric, and colonial forces.]

About the VisArts 2022 Emerging Curator

Arnaldo Rodríguez Bagué is an artist, curator, and researcher from San Juan, Puerto Rico. They studied a BA in Sociocultural Anthropology in 2006) and a MA in Cultural Management and Administration in 2015 from the University of Puerto Rico, Río Piedras Campus. They continued their formation in the Independent Curator International’s Curatorial Intensive in 2015 and Beta Local’s La Práctica from 2016 to 2017. Their visual art practice explores the relations between Caribbean colonial and natural history through video art, video installation, and cartography. They have exhibited in Beta Local (Old San Juan) and Hidrante (Santurce). Their curatorial practices are centered on Puerto Rican performance art history and on diverse performance and visual art practices that explore counter-hegemonic and speculative approaches to colonial territory in Puerto Rican and the Caribbean. They curated the “Foro Permanente de Performance” from 2013 to 2015, a performance platform in and for the University of Puerto Rico’s Women and Gender Studies Program, and exhibited the platform’s documentation in the exhibition titled “Area de Ensayo” in 2015 at the Univesity’s General Studies Faculty. They co-curated, along with performance artist Mickey Negrón, Asuntos Efímero’s “QUIEBRE: Festival Internacional de Performance” in El Paseo de Diego, Río Piedras, in 2016. Where they also curated experimental dance retrospective “Pisotón: antes de todo género” in La Casa Cultural Ruth Hernández. Currently, they are doctoral candidates in performance studies from Northwestern University (2018-2024). Their doctoral research, “Caribbean-yet-to-come” explores the intersections between performance, materialism, and territory in the Caribbean in a geohistorical moment marked by colonialism, natural disaster, and climate change. Along Ramón Rivera-Servera and Pepe Álvarez Colón, they co-curate the Puerto Rican Arts Initiative.