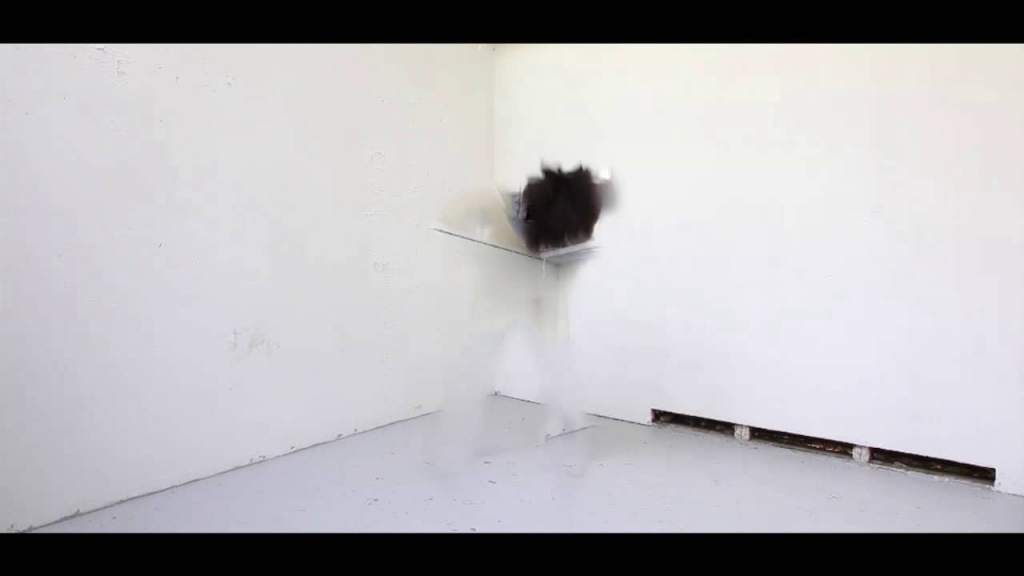 Bend and Hold is an exhibition featuring the work of artists, Brendan Fernandes (NYC), FlucT (NYC), Sondra Perry (NYC), and Sidney Pink (BALTIMORE).  The work of these artists explores the physical relationships between a dancer/mover and their surroundings. Specifically how they destabilize those relationships and alter expectations of how a body is supposed to be in spaces. Represented in this exhibition are video and photographic documentation of live performances, and drawings turned choreographic scores.

About the Mentoring Curator for the 2016 VisArts Emerging Curator Program:

Jackie Milad is an Egyptian-Honduran first generation American. She is a practicing visual artist and curator based in Baltimore City. She began her curatorial career as the Co-Founder of the now popular Transmodern Festival, an artist-run performance art and experimental media festival now in its 12th year. Throughout her curatorial career Milad has had the good fortune of working with many internationally recognized artists. She served as the Exhibitions Director for the Rosenberg Gallery at Goucher College, and has held the position of Gallery Director and Curator for the Stamp Gallery at University of Maryland in College Park. Milad now serves as the Chief Curator of Contemporary Art for the Delaware Center for the Contemporary Arts in Wilmington.

In her role as an artist she has exhibited and performed internationally and nationally in venues such as the Contemporary Museum in Baltimore, the Arlington Art Center and The Richard Foreman Ontological Theater in New York City. Milad has participated in numerous solo exhibitions most notably with Flashpoint Gallery in Washington D.C. and the Museum of Fine Arts in Mazatlan, Mexico and Culiacan, Mexico. In 2010 Milad was awarded an individual artist grant from Maryland State Arts Council. In 2005 she earned her M.F.A. from Towson University where she was a recipient of a competitive Graduate Fellowship. In 2000 she received her B.F.A. from Tufts University and the School of Museum of Fine Arts in Massachusetts. In 1998, Milad studied painting at the Studio Arts Center International in Florence, Italy. More recently, she participated in an artist residency at the Vermont Studio Center in 2015.

Eames Armstrong is an interdisciplinary artist and curator, and the founder and director of Aether Art Projects, an organization which emphasizes experimentation, performance, and collaboration through exhibitions and events. Eames received a B.F.A. from The School of the Museum of Fine Arts, Boston in 2010 with emphasis on painting, writing, and performance. Eames is currently pursuing an M.F.A. in studio art at George Washington University in Washington, DC.

I bring principles of flexibility and collaboration from my own visual and performance art work to my curating. I believe in an integrated studio, writing, and curatorial practice. One of the many roles of the curator is to facilitate exchange among artists, I try to do this through organizing events independently as Aether Art Projects and in conjunction with galleries and organizations and through maintaining an online art journal, PERI0D. I know how Hans Ulrich Obrist felt when he said, “I feel an urgent need to produce communities.”

Through art, and for me especially through performance, we can learn much about each other. We can learn about how another person thinks and experiences the world, and new ways to see and interact with other people through their expression of ideas. In organizing and facilitating a lot of art over the last few years, I have had the opportunity to be closely engaged with so many various creative processes. Each of these experiences makes up the basis of my curatorial approach.

About the VisArts Emerging Curator Program: