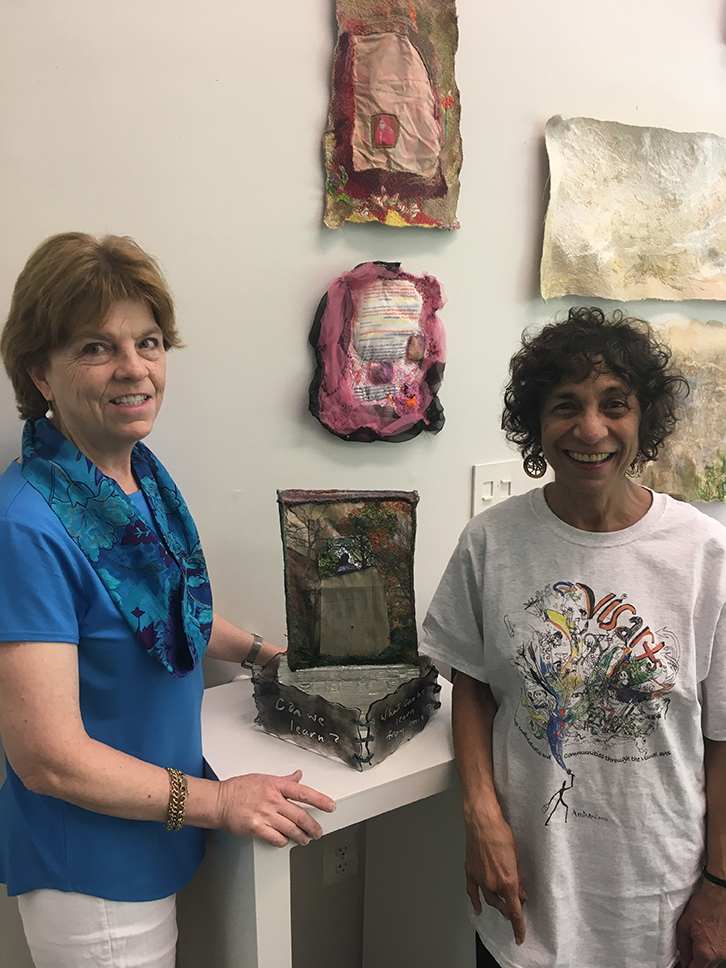 Maria-Theresa Fernandes and Nanette Bevan inhabit neighboring studios at VisArts, but the wall that separates them is permeable. Since meeting at VisArts this January, the two artists have enjoyed an open exchange of ideas that has led to the creation of several new collaborative works and programs.

Place, travel, and environment play an important role in fiber artist Maria-Theresa’s internationally acclaimed work. Having traveled the globe creating work and collecting stories, she joined VisArts in January as a Fleur and Charles Bresler Resident Artist. The four-month residency provides free studio space and encourages interaction, dialogue, and exploration with the artistic and larger community.

Nanette, an accomplished glass artist with more than 20 years of experience in glass and mixed media, has been a VisArts instructor and studio artist since 2012. Images and colors often seen in her work reflect time spent living in Japan, Iran, and her home, New England.

For Maria-Theresa and Nanette, who have been working for months on a textile and glass installation, the cross pollination of ideas is key to the creative process. During Maria-Theresa’s residency at VisArts, the visual artists and a local poet have collaborated to mine uneasy truths of Rockville history, such as a controversial sculpture of a Confederate soldier that is due to be relocated to White’s Ferry. The resulting mixed media installation incorporates glass, textile, and poetry to show a soldier partially hidden from view, yet placed on a pedestal, symbolic of our uncomfortable relationship to past events and prejudices.

“As artists, it is important to challenge ourselves,” says Maria-Theresa: “When we work in isolation, we don’t push ourselves; but when we learn from each other, we find new ways of looking at the world.” Nanette adds that collaboration across mediums and across cultures encourages a new way of solving problems. She reflects: “Anything new creates new neural pathways . . . To grow and evolve, we need to get out of our routine and actively seek out new things.”

This past weekend, the artists presented a joint workshop for children as part of Inside Art, an interdisciplinary initiative allowing people to engage with VisArts exhibitions in a new way through fun and varied activities. Next up, the artists’ collaborative work integrating kiln formed glass and fiber will be on display as part of the VisArts Studio Artists Show from May 19-June 16, 2017.

Maria-Theresa’s work is also on display through May 12 at The Center for the Arts and Religion at Wesley Theological Seminary in Washington, D.C., and through July 30 at the College Park Marriott Hotel and Conference Center in Baltimore, Maryland.

Sharon Witting is a staff writer and Director of External Relations at VisArts.