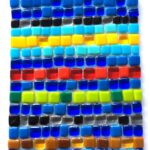 She lived and worked primarily in Washington, D.C. and The Washington Post described her as a force in the Washington Color School. The Wall Street Journal described her in 2016 as a previously “underappreciated artist” who is more recently recognized for her “exuberant” works, noteworthy for their pattern, rhythm and color. Thomas remains an influence to young and old as she was a cornerstone for the Fine Arts at Howard University, started a successful art career later in her life, and took major strides during times of segregation as an African-American female artist.

Thomas believed that creativity should be independent of gender or race, creating works with a focus on accidental beauty and the abstraction of color.