“I make enclosures, spaces, and objects directly relating to the proportions of the body and its use. I consider how one might move around these places and feel at ease or experience discomfort, relation or alienation: physical and mental discomfort either through the materiality of a heavy object, or the tight confines of erect walls; relation to the size of one’s body; or alienation from the unknown use or coded symbols. Through the framework of the military, the way it is structured, ordered, standardized, and fashioned, my work questions the performance of the body within structured environments.”

Nice to have you here Jack! What are you working on at the moment?

Right now I’m trying to get some sculptures going. I’m taking the same ideas, but I’m also going to reapply some of the old, military aesthetics of what I used to make. My work at VisArts is more about exploring school institutions, and I’m trying to merge those two ideas of school and the military together. Some of this work involves a lot more color, while my previous work was a lot more muted/earth tones, with rusty metal and all sorts of things.

What ideas do you have about school, and what messages are you trying to send?

I think about the school system as a bigger institution that’s forming and guiding individuals through paths of their life. When I was doing work in Arlington, my work was about the objects you pass through in hallways and spaces, and how they have an effect on the body and development.

When I bring in found objects, or other things that I relate to, I think about how I can change or alter them, so that ideas about that object are perceived in a different way, so people can question why those objects were set up in that way. When you bring the objects into a gallery space, you are asking the viewer to look at it, maybe for the first time, in a more thoughtful manner.

I recently made some reclaimed lockers, which became more of a metaphor for the type of outlets that children have. I’m a middle school teacher, so this work really played into that idea of the angsty, no filter kind of childhood moments that you have, because these lockers are sprawled in graffiti, and all kinds of things are carved and written into them.

I also think about school in relation to the military, which also controls and guides individuals through certain pathways. A lot of times, the people who end up in the military have gone through public school institutions, which lead to college or the military, maybe for the worse or better. 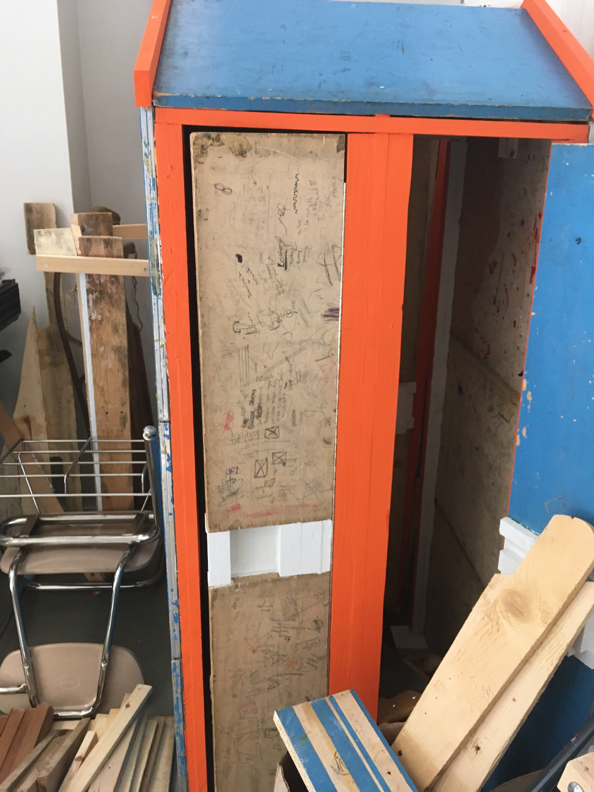 When people view your work, what questions or feelings are you trying to evoke?

I think the main thing is how we as bodies are moving throughout the world, and how we are encountering institutional systems and spaces. I want them to question “Why are these materials in front of me?” or “Why are they reminiscent of certain things I might have an experience with?”

My work is more focused towards these kind of forms that look like they could be military objects, or shelters. The majority of people probably don’t have much experience with them except through media maybe, so that gets them to slow down and think about what my work means. If it’s something big and heavy looking, they are going to react to it more so than if it was small and fragile. I think those dynamics between the viewer and the object are important to bring to the surface.

So your work is more interactive?

I mean, I don’t know if I’m going to be making something large enough that people can move through, but I want people to move around them enough so that when they see it, it could invoke different experiences in different ways. Like, if you look at it one way, it could be a plane or a desk.

Right now, I’m trying to rediscover and play with different materials. So I bring in different objects, like this rusty spring in my studio that I’m currently just adding to. Right now it doesn’t evoke much yet, but I find that by adding to something, or by cutting off something, it could start to become something more familiar. 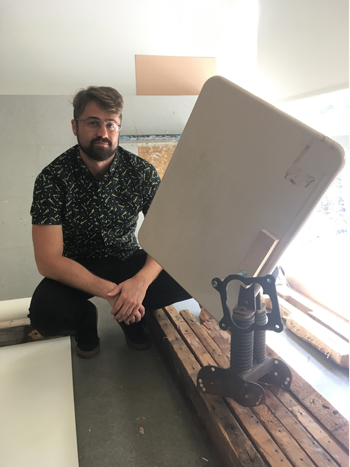 Something else I would really like to know is how the military helped shape your current artistic process.

It was a big influence, because when I got out and went back to school, art is what I continued to pursue. I had done a little before, but it influenced how I think about viewing the material that I find, and the usefulness of things that are usually cast off. A lot of what I did in the military was improvising with what you have, so I try and do that as much as I can.

Unfortunately, I also scavenge for a lot of stuff, so I end up with too much. A lot of times, these things will be sitting with me for months before I use them. But I’ve picked them up for a certain reason. I’m attracted to their aesthetic, which reminds me of a desert quality, or camouflage aesthetic.

I also think that because of the military, I work in a feeling of when your body is constantly in motion, with a bodily discipline or drive to move forward, sort of as if you were marching, or doing something almost automatically.

So, your process has a lot of fluidity?

Yeah, it becomes almost a performance. It’s rare if you get into a place like that, but it’s also how you know when you’re working your best. I think that part of how your body performs as a means for making things or taking apart things, is kind of a part of that military training, or how your body is an instrument for the grander scheme of the institution.

Okay, so I’m very curious about the materials you are attracted to. Is there a material that you feel is a very integral part of your work?

Wood, because I like the natural qualities of it. The way it can kind of age, but still sustain its strength probably makes it my number 1 medium, although I am by no means the best woodworker. Because it has flexibility, and a little bit of give, that allows someone who doesn’t have the greatest skill set, to be successful in using it.

I also like to include found objects, and am attracted to rusted, weathered metal.  I am now using a little more ceramic clay and stone. I really like doing it, and will probably do it again, but thinking about that as a material is a little more difficult, because it has a more historical weight, when it comes to sculpture. I’m hesitant to continue using stone, so I’d say wood is probably number one medium, as well as found objects.

What is your process for artwork like? When you create these spaces for people to experience, do you spend a lot of time planning? Or do you just go for it?

If it’s something big like a space, it comes from some kind of sketch. I will start off with this sort of master plan, but usually throughout the process, the plan is always inevitably changing. That’s when I get into more of my process of holding things together, and using my body to support things, so that it becomes a little more organic.

The school lockers I was working with, for example, were pretty solidly planned and constructed. But even with something like that, you run into things where you have to improvise. Improvising is a big part of my process, so I could propose something in a plan, but generally it won’t end up that way, because I think the fun part about making art are the surprises you find along the way.

Before you went to the military, you were attending a college at the University of Maryland at Salisbury, right? What was your work like back then, when you were just starting out?

When I was there for my first year of college, I didn’t really know what I was doing, and that was why I made the choice to join the military. I didn’t see it as an avenue for me yet because I was still so young. I just took the general fundamentals classes. I did take ceramics, and that was the first time I started to like it. But I would say that I had no style, or even an idea that I would be making art at this level.

Not until two years maybe, after I got out of the military, and was at University of Maryland College Park with good mentors, did I start to mature in my work and find my voice. That voice was mostly built around my experience, and understanding that I was attracted to those kinds of aesthetics, and the concept of that institution.

I’m glad that you took the time to talk about your work, and what you are planning for your upcoming exhibitions.

I appreciate the opportunity I have been given to work with these ideas that I have been thinking about in my sculptural practice. Having the space has been very helpful to circulate those ideas and work with new materials. Thank you for the interview.

Thank you Jack! It’s been a pleasure.

This interview was conducted by Iona Nave Griesmann, a VisArts Intern. They specialize in illustration and are majoring in Graphic Design and Illustration at Montgomery College.