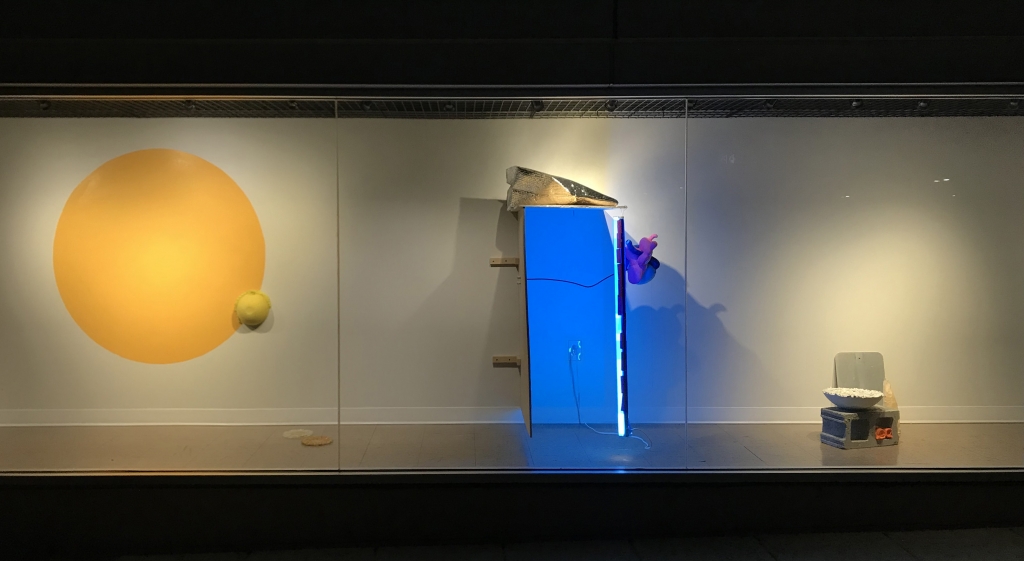 yolk | shell | source | system is a collaborative installation by Beki Basch and Clay Dunklin. Working intuitively, the artists instate division and order based on the logic of the 355 Pod as it corresponds to the work by mixing high and low craft, disposable and archival, contemporary and ancient. Inspired by the confines of the space itself, Basch and Dunklin channel their own processes and ideas where design meets art meets institutional display.

Bekí Basch is an interdisciplinary artist who works in a project-based practice in which form is dictated by idea. She employs traditional and contemporary practices to investigate universal monomythic traits of cultural, historical and social issues through material. Her work creates suggestively narrative spaces from a wide web of connections. She received a BFA from MICA in 2009, and is on her way to an MFA at UMD, College Park this spring. Bekí has exhibited nationally and internationally in venues such as SÍM Gallery in Reykjavík, Iceland, The Burren College of Art in Ballyvaughan, Ireland, Locust Projects in Miami, FL and Current Space in Baltimore, MD. She recently completed a one-month residency in Reykjavík, Iceland, which she was awarded to research multiple topics including environmental stewardship, national identity and the tourism boom. www.bekibasch.com

Clay Dunklin’s video, sculptural, and new media works serve to expand notions around the body and performativity. His work is situated on the thin veil that exists between the body and technology and marks a gooey, fluid, fragile state where various incarnations are reborn out of their former selves. Dunklin has exhibited his work nationally including shows at the Orlando Science Center and the American University Museum at the Katzen Arts Center. Originally from East Texas, he received his BFA in drawing at the University of Central Florida in Orlando and is currently an MFA candidate at the University of Maryland, College Park. www.claydunklin.com