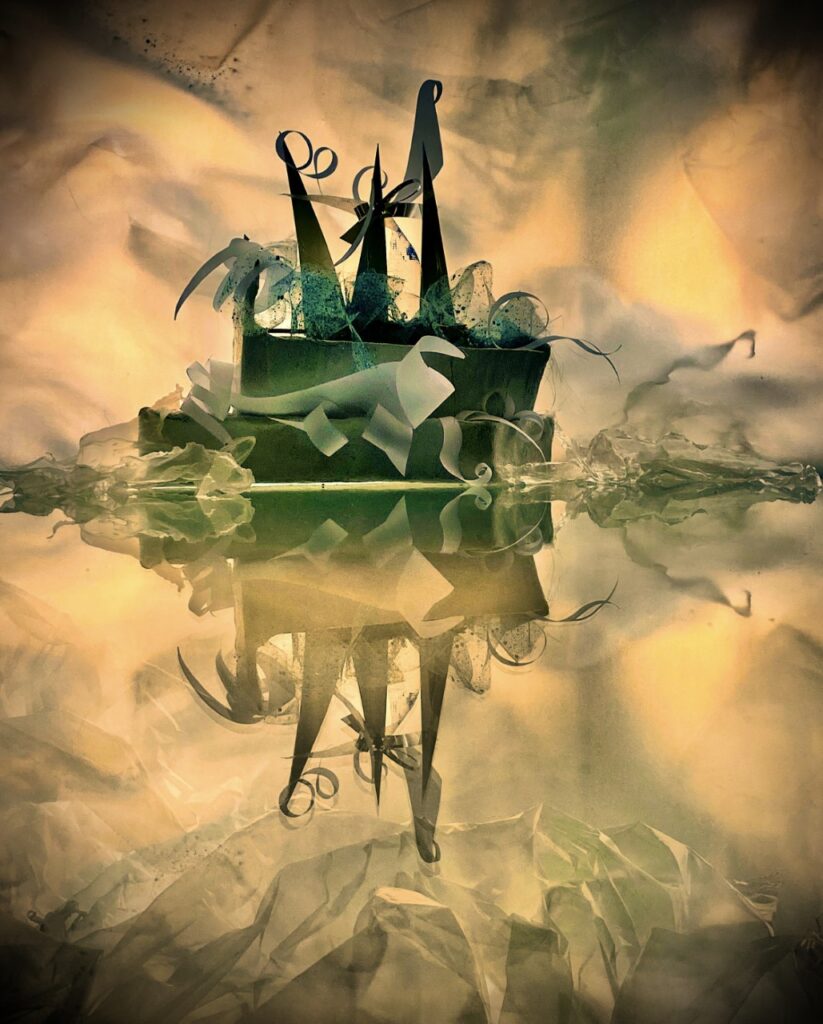 A conversation between Ann Burke Daly and Sue Wrbican

This work is an iteration of The Iridescent Yonder which was exhibited during the summer of 2021 at Riverviews Art Space in Lynchburg, Virginia. I have created new works to accompany this reconfiguration for VisArts.

In 1990 my brother, Matt Wrbican, created Oil Tanker, a mixed-media relief work composed of consumer grade plastic objects. Matt’s fellow artists Phil Rostek, painted the sea with tar and, James Nelson, the sky. The work was part of their collaborative exhibition The Labyrinth at the Pittsburgh Center for the Arts. Afterwards the work went safely into storage until 2020. Today, over 30 years later, the critique they made then is still relevant with regard to oil, war, capitalism, consumerism and the environment. Throughout Matt’s life these concerns remained with him. As the archivist for the Andy Warhol Museum he once curated a group show for the museum entitled 6 Billion Perps Held Hostage! Artists Address Global Warming (2007)

In 2019 Matt passed away from a lengthy battle with brain cancer and 6 weeks later my mother, Annabell, passed as well. I made small sculptures from shipping detritus and shredded medical bills and processed my compounded grief. During the Covid-19 winter of 2021 I cast hundreds of fishlike forms in my kitchen with handmade paper that contained bits of my mother’s sensitive information. Working in this quiet, repetitive, meditative process opened more possibilities. I then formed clay fish to be photographed as if they were swimming. Thinking of my brother, his work  and his now and forever absence I imagined the fish turning into a comet.

Expressly for this exhibition Claire McConaughy, Matt’s lifelong friend, created Fragile Rainbow in response to Oil Tanker, so that the two works are in proximity to one another and continue the conversation.

Sue Wrbican lives and works in the Washington D.C. metro area in Alexandria, VA. Her sculpture Buoyant Force (2020) is presently installed at Tephra ICA. In the Fall of 2017, she presented her extensive artistic exploration into the work of Kay Sage at the Greater Reston Art Center in Virginia. In 2015 her site specific sculpture, The Eventual Outcome of an Instant was constructed at the Seligmann Center in Sugar Loaf, NY.  Her video Back Roof  is part of Miranda July’s Joanie 4 Jackie Archive at the Getty Research Institute, Los Angeles, CA.  In 2014 she presented her installation and lecture Continue the Temporary and It Becomes Forever at the Zizek Studies conference at the University of Cincinnati’s College of Design, Art, Architecture and Planning.

Wrbican has held residencies at the Robert Rauschenberg Residency in Captiva, Florida, the Kala Art Institute in Berkeley, California, The Atlantic Center for the Arts in New Smyrna Beach, Florida and STUD Residency in Catlett, Virginia. She is a founding member of the Floating Lab Collective whose projects have been exhibited widely in venues such as ZKM, Karlsruhe, Germany and the Nathan Cummings Foundation, NYC, NY. In 2008 she worked with Mary Carothers on a project addressing gas consumption and the environment entitled The Frozen Car.

Her studio is located in the Monroe Street ArtsWalk in the Brookland neighborhood of Washington, DC. Sue Wrbican teaches in the School of Art at George Mason University and her education includes an MFA in Photography from the Rhode Island School of Design and BA in English Writing with a concentration in poetry from the University of Pittsburgh.