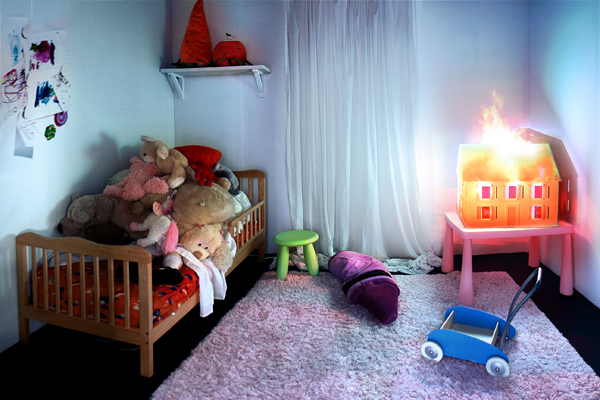 Suspension is a dispersion of particles; a postponement or interruption of ordinary thinking and seeing; a transitory state of uncertainty and excitement; a bridge between belief and disbelief; or none of the above.

(Exhibitions and receptions are free and open to the public)

Andrew Neumann is an artist who works in a variety of media, including sculpture, film and video installation, and electronic/interactive music. In 2004 he received a Guggenheim Fellowship. He has recently had one-person shows at bitforms Gallery in Seoul, Korea, the DeCordova Museum in Lincoln, MA, bitforms Gallery, NYC, and a solo show for the Boston Cyberarts Festival. His original artistic output consisted of single channel videos and films. He then moved on to integrate a variety of electronic and digital technologies into his 3D and sculptural work. In addition to this, he has been building electronic musical interfaces, and is very active in electro-acoustic improvisation. His music is available on Sublingual Records. His single channel videos have been shown on PBS, The Worldwide Video Festival, Artist Space, and elsewhere. He has had solo music/video performances at Experimental Intermedia, Roulette, Issue Project Room in New York. During 2001 he was an Artist in Residence at the iEAR Studio at Rensalear Polytech Institute and at the Visual Studies Workshop. He has also had residencies at The Experimental Television Center, MacDowell Colony, YADDO, Ucross Foundation, Steim , Atlantic Center for the Arts, Art/OMI , and iPARK. www.adneumann.com

Holden Brown was born in New Orleans, Louisiana and is currently based in New York. He is a recipient of the Gold Award for the National Foundation for the Advancement of the Arts (NFAA) and, in 2009, was named a U.S. Presidential Scholar in the Arts. Brown received his BFA at the Maryland Institute College of Art (MICA), with a major in Film and Video. He was a 2014 summer resident at the Wassaic Artist Residency and will be traveling to Sweden, in spring 2015, to complete his latest project, funded through The MICA Chair’s Award travel grant. Most notably, Brown has exhibited in the National Portrait Gallery in Washington, DC and The Baryshnikov Arts Center in New York, NY. www.holdenmbrown.com

Betty Boehm was born in 1979 in Reutlingen, Germany. From 2000 to 2008 she studied Fine Arts in Stuttgart, Germany and, within the scope of the Baden-Württemberg Stipendium, in San Francisco, USA. During the course of her studies, she gained experience in various artistic disciplines, reaching from drawing, painting and sculpting to video art, acting and experimental sound art. Over the last years, these different creative disciplines merged into video/film, photography and sound works, which are often embedded in an installative context. She creates all sounds and music for her audio-visual work. After her graduation at the Academy of Fine Arts Stuttgart, she received the Landesgraduierten-Stipendium and moved to Berlin where she has worked with Reynold Reynolds in the camera department. Her works have been shown internationally in numerous shows and screenings. She lives and works in Berlin. www.bettyboehm.de

Brandon Morse is a Washington, DC based artist who works with generative systems as a means to examine the ways in which physical phenomena such as entropy and emergence can function in ways that are both poetic and metaphorical. Through the use of code, and the creation of custom computer software, he creates simulations of seemingly complex systems to create video and video installations that seek to draw parallels between the ways in which these systems work and the ways in which we, both individually and collectively, navigate the world around us. He has exhibited his work in museums and galleries across North America, Asia, and Europe.http://www.coplanar.org

Stephanie Barber is an American writer and artist. She has created a poetic, conceptual and philosophical body of work in a variety of media. Many of her videos are concerned with the content, musicality and experiential qualities of language. They ferry viewers through philosophical inquiry with the unexpected oars of play, emotionalism, story, and humor. Barber’s films and videos have has been screened nationally and internationally in solo and group shows at MOMA, NY, The Tate Modern, London; The Whitney Museum of American Art, NY; The Paris Cinematheque; The Walker Art Center, MN; MOCA Los Angeles, The Wexner Center for Art, OH, among other galleries, museums and festivals. Her videos are distributed by Video Data Bank and her films can be found at Canyon Cinema and Fandor.com. Her essays, stories and poems have been published in books, magazines and online journals. DAREDEVILS is her first feature. http://daredevilsmovie.com