Maryam Khaleghiyazdi: Living in Between 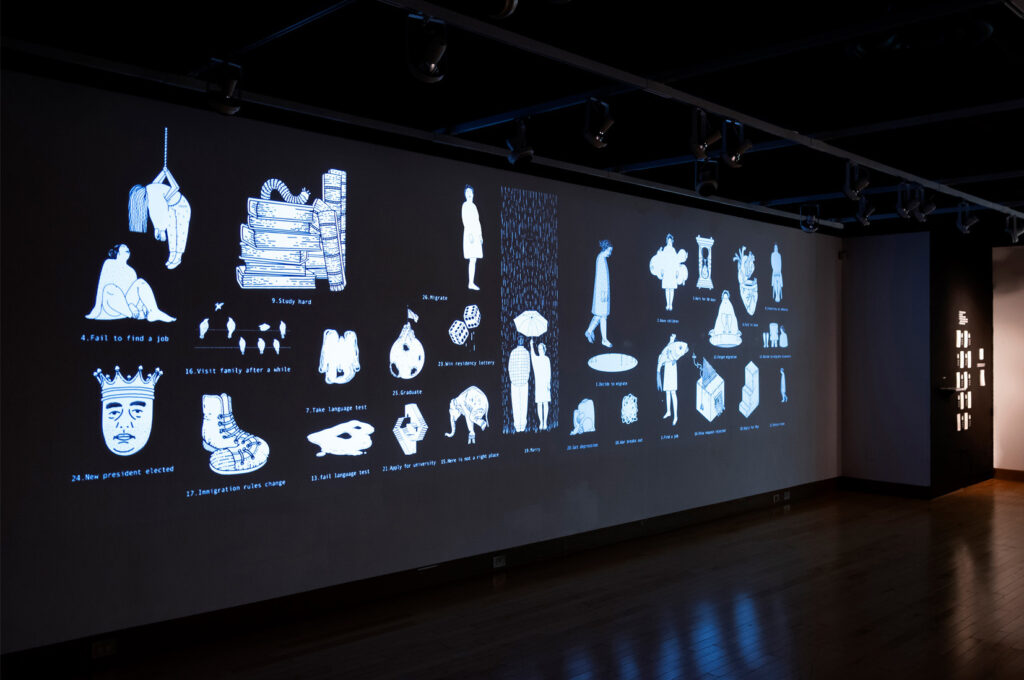 Maryam Khaleghiyazdi: Living in Between

“Living in Between” is an interactive, multimedia installation with three pieces. These pieces narrate my life as the result of living between two countries, Iran and the United States. The pieces are about changing the appearance of American objects. I have picked these objects from my daily life to show how I see these objects as an immigrant. In the pieces, I am narrating my life as an immigrant to convey the concepts of development, loneliness, and vulnerability. One of the pieces is an animation that narrates how I interact with my shadow; this symbolizes my old and new thoughts as the result of living between two cultures. I am working on the concept of living in between because the United States is a diverse community that is willing to accept different people from different cultures, but, since the 2017 immigration executive order, our life has been changed a lot. This phenomenon made me reconsider the concept of home and my identity. Since, in the United States, people need to live in harmony with immigrants, they should know about their lives and the challenges they face.

Maryam Khaleghiyazdi is an Iranian multimedia artist and design professor based in Minnesota. The areas of her work and teaching cover different realms, like digital art, illustration, augmented reality, animation, and graphic design. Currently, she is exploring her identity as a person who has migrated from Iran to the United States. She is applying illustration as a vehicle to expose her state as a person who lives between two different countries.

Khaleghiyazdi is the Assistant Professor of Graphic Design in the Art and Design Department at the University of Minnesota, Duluth. She received her B.A. and M.F.A. in Visual Communication from the University of Tehran, Iran and her second M.F.A. in Graphic Design from Ohio University, U.S. She has exposed her art and design work to different national and international exhibitions in various countries like Iran, U.S., Germany, South Korea, Japan, Italy, U.K., Switzerland, Mexico, etc. She has won several prizes like the Silver Prize of A ’Design Award in Italy, the merit award of HOW International Design Awards in the U.S., the first prize of International Triennial of Ecological Posters in Ukraine, and the second award of the International Poster Design Competition Post-it Awards in Russia.