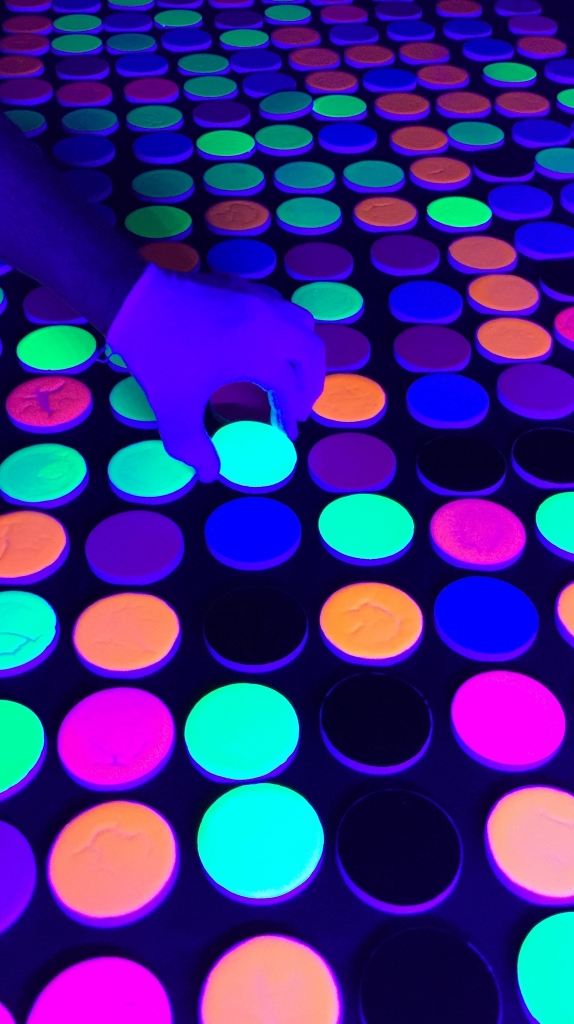 Interact: to act together : to come together and have an effect on each other

Integrate: to combine (two or more things) to form or create something

INTERACT + INTEGRATE is an exhibition organized by Jackie Hoysted, featuring four artists whose art practices are concerned with the interaction and/or integration of the audience in their work. Interaction is usually concerned with communication. It can simply be a manual interaction between people and things, or for new media artists it typically involves the interaction between humans, computers, sensors and networks. Conversely, integration is concerned about combining, assimilating, bringing together and the coalescing of people and things. For each of these artists, the participation of the audience is essential.

Heloisa Escudero looks for interaction, reaction, participation and/or inclusiveness of the audience in most of her artwork. For her, the integration of the audience is essential and creates opportunities for the viewer to become an interactive/tactile part of the art itself. For Escudero, there are too many opportunities for exclusion in life and she sees them as a form of rejection. As a result, the basis of her art practice is to include/interact with the audience in a more personal level. Any aspect of her artwork, from the elements of construction, to concept and interaction is designed not to reject anyone at any circumstance, because there is enough of that in life.  www.heloisaescudero.com

Michelle Lisa Herman’s new media and interactive works are often inspired by moments of communication that occur on the smallest of scales. Some examples include quorum sensing (the way in which bacteria are thought to communicate) and “contagious” gestures such as yawning and smiling (which are thought to activate mirror neurons in the brain). She is interested in how these processes seem to highlight our intrinsic need to connect with one other, as well as how modern culture and technology has mediated these experiences. Like the ideas they explore, these works are interactive so the viewer can truly experience the work in a multi-sensory way. Herman wants them to feel the piece in a more active sense, than just presenting them with an image.  www.michellelisaherman.com

Jackie Hoysted’s main concern is to no longer relegate the art audience to viewer, but to integrate them in the art making process where they become a collaborator and co-creator. Her idea is that the audience becomes engaged in the creation of the artwork, and determines the aesthetic “look” of the artwork, based on for example, the color selection and placement. As a result, the artwork can never be completed as the audience can choose to rearrange the artwork at any time. The artwork is therefore never fixed and mutable.  www.jackiehoysted.com

Denise Philipbar’s installations follow two modes of enquiry. Some installations are musings on our interactions with the technology we create hence forming the basis for their interactive nature, while other installations are social practice projects in nature, and evolve from the premise that social practice projects grow out of thoughts that are inspired by the way we interact directly with each other, rather than technology. For Philipbar’s musings on technology, she mostly uses found objects such as test tubes or surveillance cameras that are assembled and modified into site specific, large-scale works. In contrast, her social practice projects are typically constructed with objects that she either handcrafts or has manufactured/altered to her specifications.   www.denisephilipbar.com