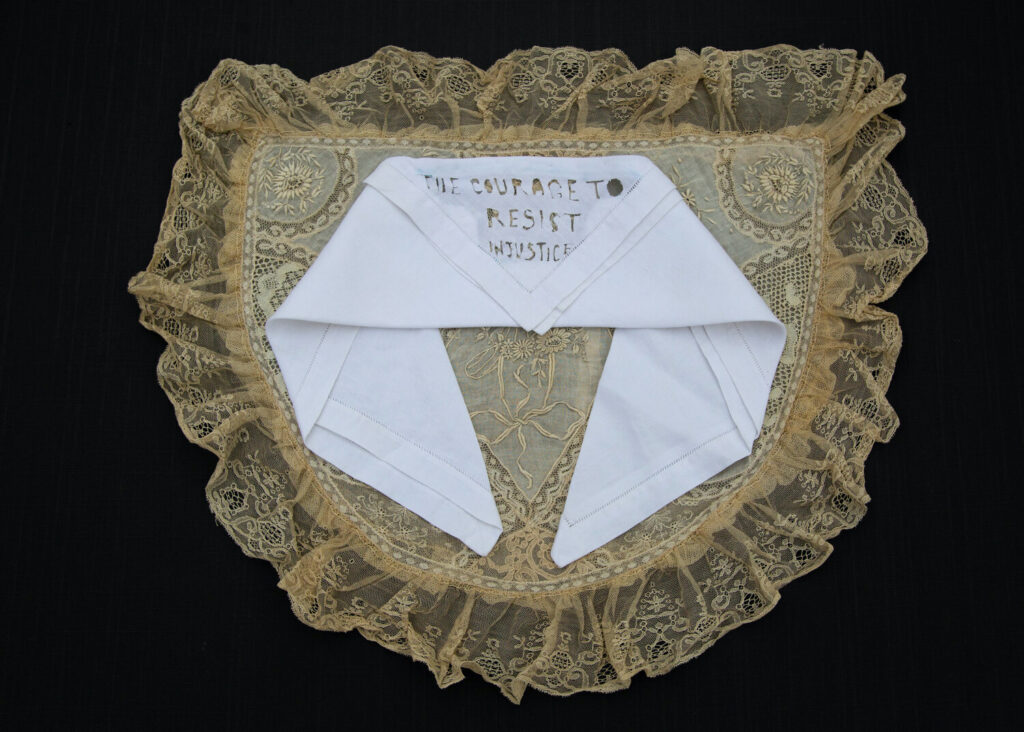 Hannah Brancato will be showing a series of works and interactive spaces based on her current project, Inheritance of White Silence. In this project, she embroidered a set of white linen napkins from her grandmother with symptoms of internalized white superiority. From a second set of napkins, she cut out phrases describing the ways she hopes to pass a legacy of resistance along to her descendants. The exhibition will feature these artworks as well as photographs, interactive spaces and a workshop series, where the public is invited to engage in this process of undoing internalized racism, by working with their own inherited objects or stories.

Inheritance of White Silence began as an excavation about the ways that she as a white person is complicit in the system of white supremacy. It has grown into an understanding of racism as trauma, which when internalized, breeds violence. As Resmaa Menakem says, “Most of us think of trauma as something that occurs in an individual body, like a toothache or a broken arm. But trauma also routinely spreads between bodies, like a contagious disease.” This exhibition and project is based on her belief that internal work to unearth racism and deal with racialized trauma, is essential to visioning a new, more free, and just world.

About the Artist: Hannah Brancato (she/her) is an artist and educator based in Baltimore, who is dedicated to mobilizing visual culture to uproot and resist white supremacy and rape culture. She is co-founder of FORCE: Upsetting Rape Culture and was part of the collective until 2020. Currently, Hannah is documenting the role of art in social justice work through her creative and teaching practice, and based on her recent project, is organizing a series of collaborative art making workshops about the inheritance of white silence. In addition to her Studio Residency at VisArts, Brancato is Montgomery College’s Fall 2021 Artist in Residence and a recipient of the 2021 Rubys Grant for her latest work, Dreamseeds, a collaboration with sound artist Sanahara Ama Chandra. Hannah is faculty at Maryland Institute College of Art, Towson University and UMBC.