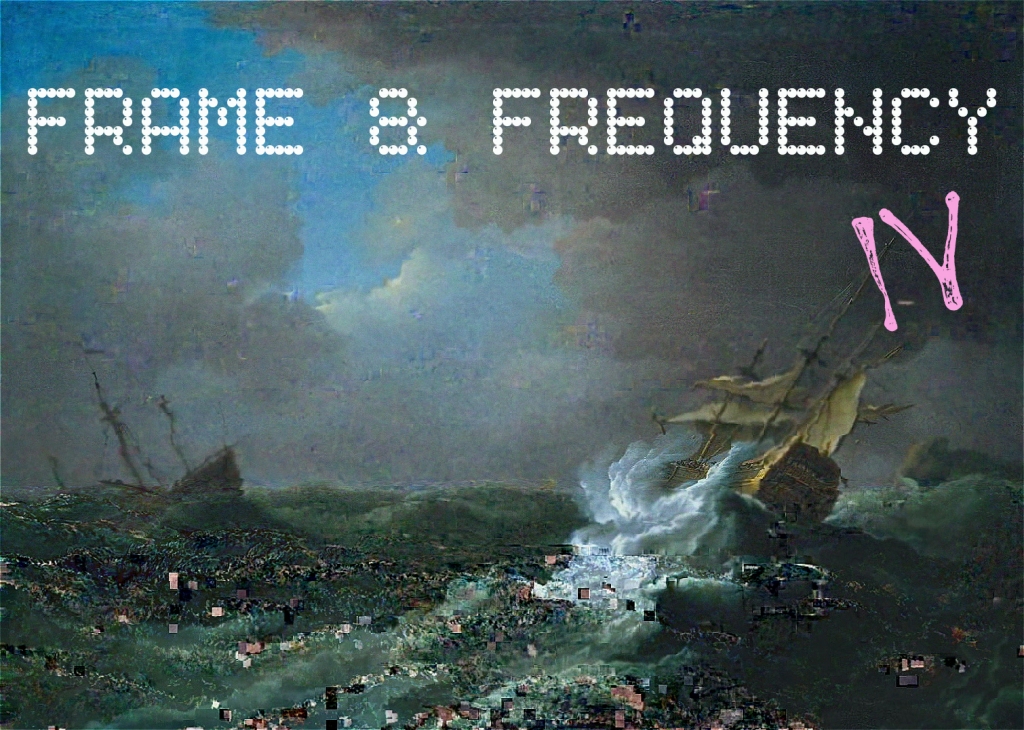 Jeroen Cluckers, Ships in Distress in a Datastorm (video still)

Frame & Frequency is an ongoing International Video Art Screening Series curated by Frank McCauley. This edition highlights the work of seven international artists from New York to Chicago, Austria to Ukraine, and from France to the UK. These new media, experimental film and video works explore contemporary visual culture, and presents an intimate panorama of the variety and breadth of video art in artistic practice today – including various themes such as appropriation, simulation vs representation, repetition, identity politics, as well as formal investigations of video as a medium.

Infinity Goddess is an ongoing video installation project where male figures in hyper-violent video games are replaced with women or ‘goddesses’. These goddesses are depicted as heroic avatars in hyper-real digital gaming worlds. The artist uses women she personally knows and links them to mythological female archetypes.

Maggie Hazen is a New York based artist who works between installation, video and performance. She holds an MFA from the Rhode Island School of Design and has done research at the European Graduate School in Switzerland, CERN, MIT and Brown University. Her solo exhibitions include Brown University’s Granoff Center (2016); and the Los Angeles Museum of Tolerance (2012) for the 20th anniversary of the 1992 LA Riots. She was also featured in the 3rd New Media Art Exhibition at the CICA Museum in South Korea and her past exhibits include OBO at Microscope Gallery (2016); and The Boston Young Contemporaries (2014). Hazen has taught at the Rhode Island School of Design, New York University and is currently a professor of art at Bard College in the department of Studio Arts and Experimental Humanities.

In the 1989 adult-oriented computer series, Leisure Suit Larry wanders the jungle of a colonized village searching for love, which he finds, after a multitude of failed romantic interactions, with Passionate Patti, a perfect and unattainable woman. In an act of cathexis, Larry’s energies concentrate on Patti in a complex of libido, love, and gender expression that leads Larry/Patti on an investigation of duality. Bell Hooks’ meditations on love attempt to guide them, but are rejected and re-purposed by the game’s instinct. Blocked by his own ego and the constructs of the game in which he wanders, Larry’s desires are continually repressed.

Alex Hovet is a visual artist based in New York City. Her work in video has been included in exhibitions and screenings nationally and internationally, including the Milwaukee Underground Film Festival, the Berlin Experimental Film Festival, the Sweet ‘Art Gallery in London, and Nieuwe Vide Gallery in the Netherlands. She holds an MFA in Photography, Video and Related Media from the School of Visual Arts in New York City and a BA from Bennington College in Vermont.

Tunnel is composed from found footage from across the internet. The visual elements collected have been reorganized as a visualization where the original contexts, meanings and intentions become secondary to their movement and spatial arrangement, they become incidental clips, a means to an end or points on a virtual map.

WW is a psychedelic, sci-fi influenced exploration of one woman’s interior world. With its surrealist use of artifice and doubling, the video documents a nameless woman performing a sequence of precisely choreographed gestures within a confined interior. The shifting tableau of imagery and abstraction merge with a haunting, electronic sound score to evoke an atmosphere of potential terror and loss.

Jil Guyon is a visual and performing artist based in New York. She received an MFA in painting and art history from Hunter College in New York and has taught at St. John’s University, Parson’s School of Art of Design and Hampshire College-Amherst. Guyon has also previously served as Curatorial Associate at Neue Galerie in New York.

Her performance-videos have been screened at Lincoln Center’s “Dance on Camera” Festival, “Cinedanse Quebec,” “Fashion Art Toronto,” “Women and Fashion FilmFEST” at Symphony Space, NYC, “San Francisco Dance Film Festival,” and “NOW New Music Festival” among others. Guyon’s interdisciplinary performances have been staged in Austria, Germany, Japan, Canada and the U.S. She is a Lumiere prize (Canada) nominee, and a recipient of the IndieFEST and Global Shorts Awards for Excellence in experimental film, the Magistrat der Stadt Wien Award (Austria), Harriet E. Eagleston Fellowship, and an Artward Bound Residency at the White Oak Plantation.

Utilizing an icon of Westernized sedentary culture, the common chair, Mougel rejects the confines of the “apparatus”, struggling against it, in an attempt to break free or adapt, in search of a new form of existence.

Florine Mougel is a visual artist based in Linz. She studied cinema in Paris and Fine Art at the School of Art and Design of Marseille. Immersed in an atmosphere of nostalgia her works stage associative arrays linked to the sense of loss, wandering through variations of déjà vu.

Manipulating videos designed for wedding films, Yefanov utilizes kitsch manifestations of angels, hearts, and roses to evoke a sense of irony. Archetypal characters are woven together, and encrypted, their particular meaning cloaked in familiarity, creating a strange new aesthetic, one which suffers from the symptoms of decadence.

Originally from Zaporizhia, Ukraine, Yuri Yefanov is a visual and performing artist, musician, and filmmaker. He graduated from Kyiv National University of Culture and Arts in 2012.

Drawing upon the experiences of the survivors of the Pulse massacre, as well as maps and recorded documentation of the space, the artist has woven primary source material from the event with footage from other cities, as well as gay and urban spaces in North America – a dark corner from The Eagle’s Nest, a leather bar in New York City; a bulletin board with club and bath house flyers from Castro District in San Francisco; local gay venues in Toronto including Pegasus Bar and Statlers; a snowy Chicago street corner; a park in downtown Orlando. This works aims to emphasize how the LGBTQ community is still very much a target throughout the world and how an event like Pulse can happen anywhere.

Ben Edelberg is a Chicago-born, Toronto-based visual artist and filmmaker. His work has been shown nationally and internationally at film festivals, micro cinemas, and galleries.

For information and guidelines on how to apply to future editions, click HERE