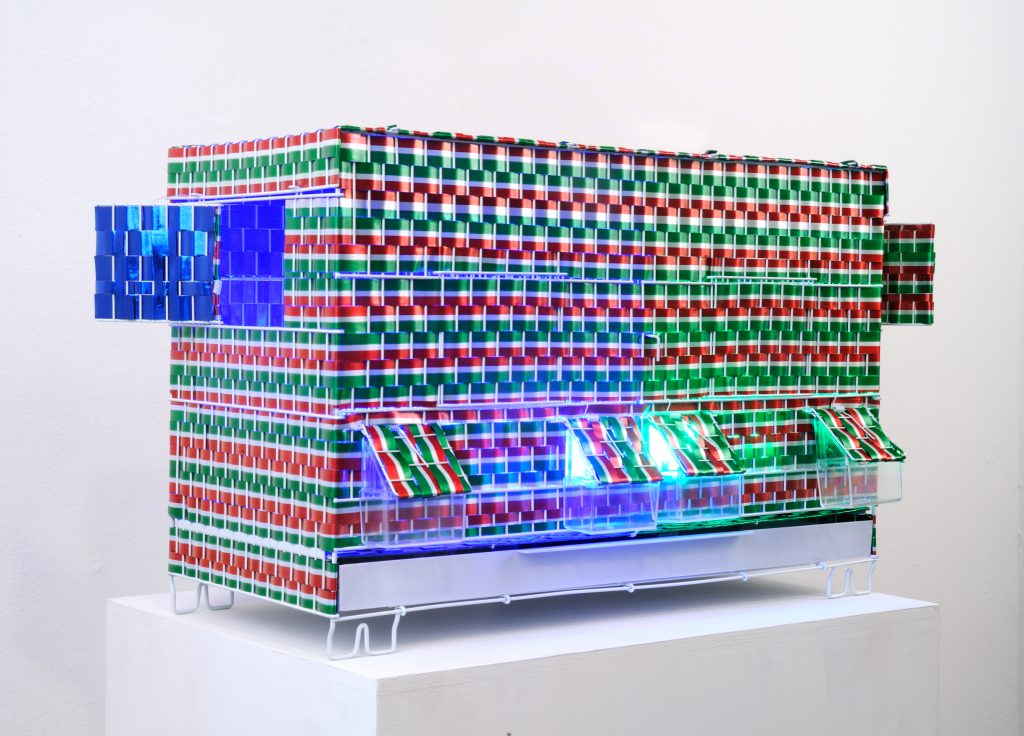 Fabiola Alvarez Yurcisin’s installation at VisArts saturates the gallery with color, light and shimmering evidence that all systems are interdependent even when there are elements with counter purposes. “Every input and output in an open system causes a feedback loop of relationships,” states Alvarez Yurcisin. Carefully placed cage-like sculptures woven with metallic ribbon, obsolete recording technologies and mirrored surfaces, emit and reflect light and color through window and door-like openings. “My woven cages always have an opening for the viewer,” says Alvarez Yurcisin. “The cages function as psychological devices that point to the artificial forms of division created by systems of oppression, power and privilege.” Alvarez Yurcisin employs weaving as a form of language and a relational tool. The viewer enters Alvarez Yurcisin’s installation and becomes part of her system, “woven” into a relationship between being an insider and an outsider, implicitly entangled with the disposable synthetic world and the cyclical natural world.

About the artist: Fabiola Alvarez Yurcisin was born in México City. She received a B.F.A. from The Art Institute of Chicago in 2003, and a B.A. from the Instituto Tecnológico de Estudios Superiores de Monterrey in 1995. She is currently a student of urban planning at Georgetown University. She has exhibited in the United States, México and Europe. Two of her books are part of the permanent collection of The Joan Flash Artists’ Book Collection at the School of the Art Institute of Chicago. She was selected in 2017 as one of the #5WomenArtists by CulturalDC, an initiative launched by The National Museum of Women in the Arts. Most recently, she received a grant from the Arts and Humanities Council of Montgomery County. Her work questions the speed in which we produce and discard our technologies. She works in both Mexico and the United States. She is currently a member of Sparkplug, an artist collective organized by the District of Columbia Arts Center in Washington, D.C.