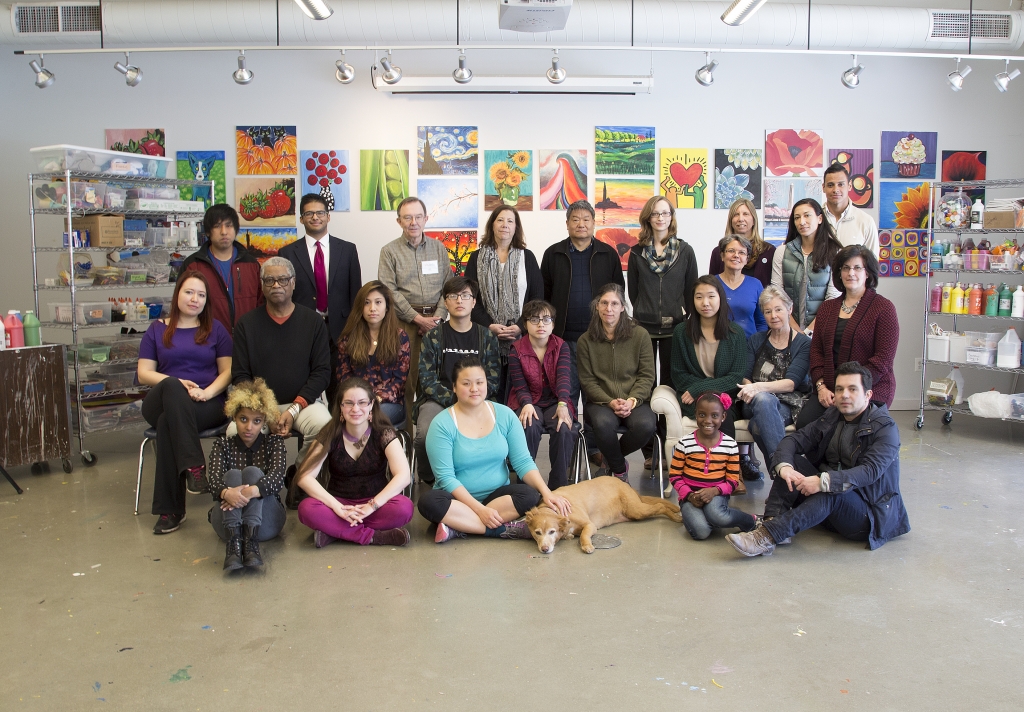 Naoko Wowsugi, a Korean woman born and raised in Japan, explores the complexity of personal identity through her portrait projects. “Group Portrait Journey in Rockville, Maryland” originates with the VisArts group: a portrait of people who work for and support this art center. The group of Board members, staff, educators, and volunteers is a microcosm of community diversity. From this template, Wowsugi spins a web of connections outward by following individuals to other groups they may belong to, and photographing these secondary connections. As the “journey” continues, the artist, photographic subjects and viewers are presented with an interwoven, revelatory composition of their community as a whole. Inspired by German photographer August Sander (1876-1964) with his systematic documentation of the people of his time, Wowsugi creates a contemporary social typology.

Baltimore-based artist Graham Coreil-Allen brings his New Public Sites project to VisArts with “The Ragged Edge of Rockville,” a radical mapping of “some of the invisible sites, overlooked features and literary spirits embedded in downtown Rockville.” Incorporating walking tours, interactive maps and a partially crowd-sourced exhibition, Coreil-Allen reveals Rockville’s historic foundations as they have become complicated by new suburbanism. The title is inspired by a quote from F. Scott Fitzgerald’s best-known novel, The Great Gatsby, in which the protagonist recalls how his birthplace in the “Middle West seems like the ragged edge of the universe now.” The nearby gravesites of F. Scott Fitzgerald and his wife Zelda are among the touchstones of this project.

Graham Coreil-Allen is a Baltimore-based interventionist public artist who explores the constructs and contradictions of the everyday built environment through videos, maps, public installations, writing and walking tours. Coreil-Allen draws experience from having lived and worked in Galveston, Texas, Tampa, Florida, New Orleans, Louisiana, Sarasota, Florida and New York City. The public artist studied at Tulane School of Architecture, completed his BA at New College of Florida and received his MFA from Maryland Institute College of Art’s Mount Royal School of Art. Coreil-Allen has staged projects for numerous spaces, places and events both nationally and abroad, including the The Deitch/Creative Time Art Parade, Eyebeam, openhouseNY, Washington Project for the Arts, Arlington Art Center, Artscape, Transmodern Festival, Current Space, Baltimore City, and the US Pavilion at the 13th International Venice Architecture Biennale.

Naoko Wowsugi, an artist of Korean-Japanese descent, works with photography, video, and performance as forms of communication. She received her MFA from Virginia Commonwealth University and her BFA from both the Kansas City Art Institute and Osaka University of the Art in Japan. Notable recent exhibitions include “Hands On” at Capital One Art Program in Richmond, VA (2014), and “Make Believe” at The Black Iris Gallery in Richmond, VA (2013). Wowsugi was a Trawick Prize finalist in 2014 and received a Mellon Fund Research Grant through American University. She lives and works in Washington, DC.

About the Curator: Laura Roulet is an independent curator and writer, specializing in contemporary and Latin American art. She was one of five international curators chosen for the citywide public art project, 5 x 5, a major initiative sponsored by the D.C. Commission on the Arts and Humanities in 2012. She has organized exhibitions in Mexico, Puerto Rico and the U.S. including at the Art Museum of the Americas, the Mexican Cultural Institute, Artisphere, Hillyer Art Space, Project 4, Fusebox and the DC Art Center. Recent exhibits include the National Drawing Invitational (Arkansas Arts Center, Little Rock, AR), CSA: 40 Years of Community-Sourced Art (Arlington Arts Center, VA), Frances Gallardo: Meteorology (Target Gallery), Sculpting Outside the Lines, an outdoor sculpture exhibit in Foggy Bottom and Medios y ambientes in Mexico City.

Her publications include many catalogue essays, encyclopedia entries, articles in American Art, Art Journal, Art Nexus, Sculpture, and the book Contemporary Puerto Rican Installation Art, the Guagua Aerea, the Trojan Horse and the Termite. She worked on the Ana Mendieta retrospective, organized by the Hirshhorn Museum in 2004, and contributed to that catalogue. Roulet is the 2015 VisArts Mentoring Curator for the VisArts Emerging Curator Program. She served as a mentor for Kayleigh Bryant-Greenwell (2015 VisArts Emerging Curator) who presented the exhibition These Mirrors are Not Boxes at VisArts in 2015.

About the VisArts Emerging Curator Program:

The VisArts Emerging Curator Program pairs an emerging curator with an experienced mentoring curator to produce new exhibitions and related programming. The program is generously funded by the Windgate Charitable Foundation.