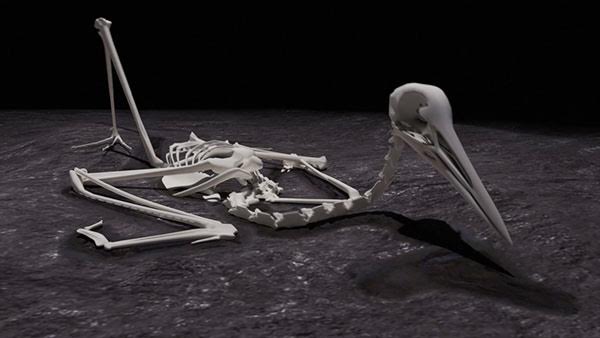 As an artist and filmmaker, Cathy Cook has always been inspired by nature, capturing images that impose a reminder of the vulnerability of the natural world and our responsibility to it. Nature, topical social issues, and poetry have been staples in Cook’s creative work over the last 32 years. Specific to her filmmaking, she has established a collage style process and aesthetic that is non-narrative, surreal and integrates multiple media techniques. Cranes in Motion aims to promote public interest, awareness, and appreciation of crane culture through a multifaceted portrayal of the natural history of this species and to allow the viewer to understand their human relationship to these extraordinary birds and our shared ecosystems.

About the artist: Cathy C. Cook has been creating films, videos, poetry films, animation, collages and installations since the early 1980’s. Cook’s new project takes her to the largest migration locations for Sandhill Cranes and Whooping Cranes to create the Cranes in Motion project. In 2012 and 2014 she received research grants from UMBC and the IRC to develop and produce this multi-media collection of works. This project includes animation, photos, moving images, sound and interactive installations.

IMMORTAL CUPBOARD: In Search of Lorine Niedecker won a Jury Award at the 2009 Wisconsin Film Festival and was nominated for the Best of Documentary at the 2010 Beloit International Film Festival. The film has screened at the Anthology Film Archives and the Bowery Poetry Club in NYC. In addition Cook presented the film for the 2009 Fall for the Book Festival at George Mason University and in San Francisco in Spring of 2010. IMMORTAL CUPBOARD was aired on Wisconsin Public TV along with an interview which was part of, “Director’s Cut.”In 2001, Cook was awarded a Guggenheim Memorial Fellowship. She has exhibited her award-winning work extensively in both solo and group shows including screenings at MOMA and the Whitney Museum. Her poetry film #536 was included in the Rattapallax #17 and her film tar guys was in the 2008 Zebra Poetry Film Festival. Currently she is an Associate Professor in Visual Arts at The University of Maryland Baltimore County (UMBC). Prior to moving to Baltimore, Cook worked in New York City for eleven years as an Art Director in the Film/TV industry. While in NYC, she also taught Film/Video production and Animation at various New York area colleges. Whenever possible she takes in nature, on a small lake in Wisconsin with her dog Zippy.