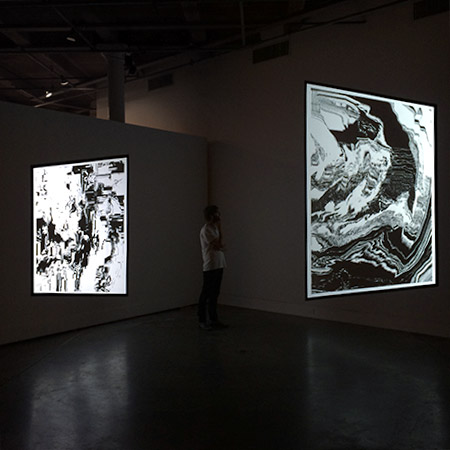 About the artist: Blake Carrington (b. 1980) works within the spheres of the visual, sound, and performing arts. He has had solo exhibitions at Contemporary Art Center New Orleans, Philadelphia Photo Arts Center, and Central Utah Art Center, featuring a range of work from inkjet painting to video installation using custom software systems. Parallel to his work in the visual arts context, he writes and performs original audiovisual compositions and releases full length albums. His debut Cathedral Scan was released in 2011 by the LA-based Dragon’s Eye Recordings, and in 2012 Radio del Museo Reina Sofia in Madrid commissioned a follow-up. Working collaboratively, he has created and performed concert visuals recently with Patti Smith and Soundwalk Collective in New York, Abu Dhabi, Paris and Marseille. He has also co-founded a collaborative silkscreen print label called Personal Desire Propaganda that promotes the work of 35 artists, and previously co-founded and curated a public art platform called Urban Video Project that has featured work by Trevor Paglen, Jill Magid, and others. He received a Jerome Foundation Travel Study Grant to research media arts in Japan, and is a 2014-2015 NYFA Fellow. Blake was born in Indiana and currently lives and works in Brooklyn.

Cathedral Scan is an audiovisual performance that treats architectural plans of Gothic cathedrals as open-ended scores. Using a custom software patch, scans of varying speeds and intensities create unique rhythms and musical possibilities from each structure. Visually the scans reveal the plans with each pass, tying sound and image together with the architectural rendering. For each performance, Carrington forms a setlist from a library of over 200 architectural plans.
The piece was performed at Elektra Festival in Montreal in 2010 then was released as a full-length album by Dragon’s Eye Recordings in 2011. In preparation for a follow-up album to be finished in 2016, Carrington teamed up recently with a live drummer, Hamburg-based musician Leo Lazar (Lazar Crash). During the world premiere hour-long concert at Westwerk in Hamburg, the two improvised through a set list of roughly 10 different plans.
Each version of the performance stresses the tenuous correspondence between different data sets — architecture, diagram, image, sound — and questions how close to an original source one can get by manipulating signs.