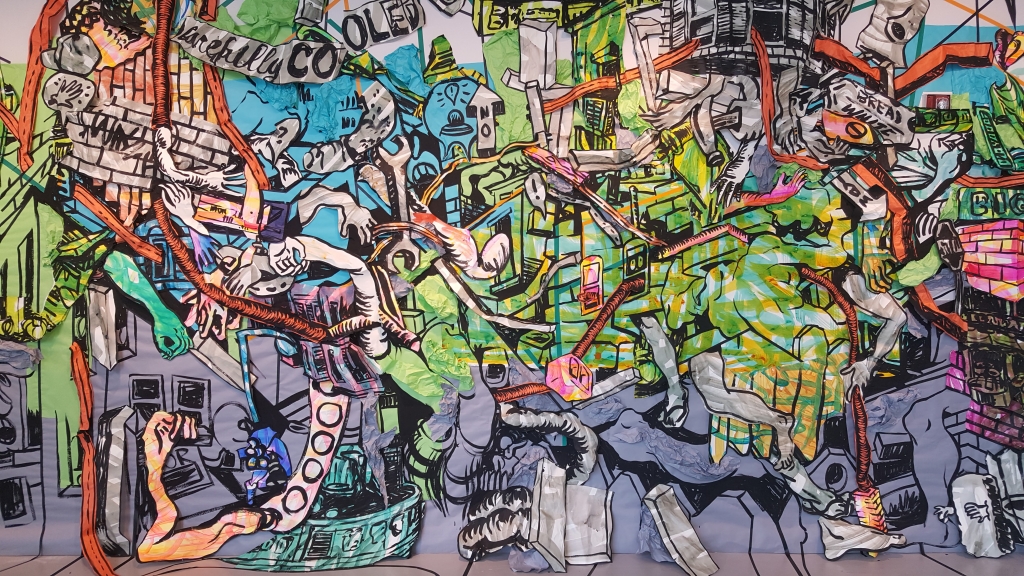 Amanda Burnham makes outsized wall drawings of cities culled (usually) from piles of paper scraps. Cities interest her as teeming containers for everything. She admires the adaptive sensibility of tinkerers, patchers, foragers, and those who make-do, like a friend who keeps bees in a 12’ x 12’ backyard, or neighbors who know that the empty “mint house” down the street is a great source for all their spearmint needs. She likes seeing apartments become organizing posts, lots become soccer pitches, and stoops become gathering places. A conjoined block of back porches, cellular in appearance, but as various as its inhabitants, is her favorite view. When she tears drawings down, the parts get stuffed into bags for eventual reuse in later drawings. A bank of rowhomes becomes a teetering television antenna, or a moveable type sign becomes a sidewalk. When she pieces parts together, she leaves the joints exposed. She values tape as both an adhesive and as a line. She rarely pictures people in her constructions, but people are not absent. Architecture interests her the moment it becomes humanized.

About the Artist: Amanda Burnham (born Toledo, Ohio, 1979) makes drawings and installations based on her explorations and encounters with the city. Her work has been exhibited widely both nationally and internationally including the Volta Art Fair (Basel, Switzerland), Halle Nord (Geneva, Switzerland), the Aldrich Museum of Contemporary Art, and the Delaware Center for Contemporary Art. She was selected by Mera Rubell for The Washington Project for the Art’s Baltimore Artists + WPA +Mera = Love exhibition hosted at Marianne Boesky Gallery in New York City and SELECT 2014 at Artisphere. She received a Rubys Grant from the Greater Baltimore Cultural Alliance, Individual Artist Awards from the Maryland State Arts Council, a Mayor’s Art Award via the Creative Baltimore Fund, and was named a Sondheim Art Prize semifinalist. Recently she was a resident artist at the Swatch Art Peace Hotel in Shanghai, China. A graduate of Harvard University (B.A.) and Yale University (M.F.A.) Burnham lives and works in Baltimore, Maryland, where she is currently an Associate Professor at Towson University.