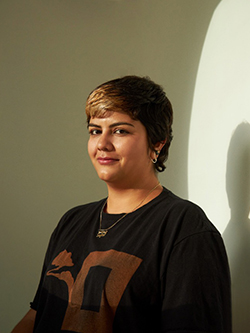 Sofía Gallisá Muriente is a Puerto Rican visual artist whose work resists colonial forces of erasure and claims the freedom of historical agency, generating mechanisms for remembering and reimagining. Through multiple approaches to documentation, she deepens the subjectivity of historical narratives and critically examines the production of images. Her pieces employ text, image and archive as medium and subject, exploring their poetic and political implications. Sofía has been a resident artist of Museo La Ene (Argentina), Alice Yard (Trinidad & Tobago), Solar (Canary Islands), FAARA (Uruguay) and Fonderie Darling (Montreal), as well as a fellow of the Flaherty Seminar and the Smithsonian Institute. Her work has been exhibited in the Whitney Biennial, the Queens Museum, ifa Galerie in Berlin, CCA Glasgow and Puerto Rican galleries like Km 0.2 and Embajada. From 2014 to 2020, she codirected the artist-run, non-profit organization Beta-Local, fostering knowledge exchange and transdisciplinary practices in Puerto Rico. She is currently a fellow of the Puerto Rican Arts Initiative and the Annenberg Innovation Lab at USC.

Arnaldo Rodríguez Bagué is an artist, curator, and researcher from San Juan, Puerto Rico. They studied a BA in Sociocultural Anthropology in 2006) and a MA in Cultural Management and Administration in 2015 from the University of Puerto Rico, Río Piedras Campus. They continued their formation in the Independent Curator International’s Curatorial Intensive in 2015 and Beta Local’s La Práctica from 2016 to 2017. Their visual art practice explores the relations between Caribbean colonial and natural history through video art, video installation, and cartography. They have exhibited in Beta Local (Old San Juan) and Hidrante (Santurce). Their curatorial practices are centered on Puerto Rican performance art history and on diverse performance and visual art practices that explore counter-hegemonic and speculative approaches to colonial territory in Puerto Rican and the Caribbean. They curated the “Foro Permanente de Performance” from 2013 to 2015, a performance platform in and for the University of Puerto Rico’s Women and Gender Studies Program, and exhibited the platform’s documentation in the exhibition titled “Area de Ensayo” in 2015 at the Univesity’s General Studies Faculty. They co-curated, along with performance artist Mickey Negrón, Asuntos Efímero’s “QUIEBRE: Festival Internacional de Performance” in El Paseo de Diego, Río Piedras, in 2016. Where they also curated experimental dance retrospective “Pisotón: antes de todo género” in La Casa Cultural Ruth Hernández. Currently, they are doctoral candidates in performance studies from Northwestern University (2018-2024). Their doctoral research, “Caribbean-yet-to-come” explores the intersections between performance, materialism, and territory in the Caribbean in a geohistorical moment marked by colonialism, natural disaster, and climate change. Along Ramón Rivera-Servera and Pepe Álvarez Colón, they co-curate the Puerto Rican Arts Initiative.